Today’s #TBT will look back at the Glass-Steagall Act of 1933.

The Chicago Booth/Kellogg School Financial Trust Index is a trust yardstick. Answered by approximately one thousand participants, the Index survey touches topics that range from the Federal Reserve to political loyalties. Its goal? To connect changes in public opinion with financial attitudes.

Since the Index began, trust has remained rather elusive. The average (below) has been just 20% to 30%: 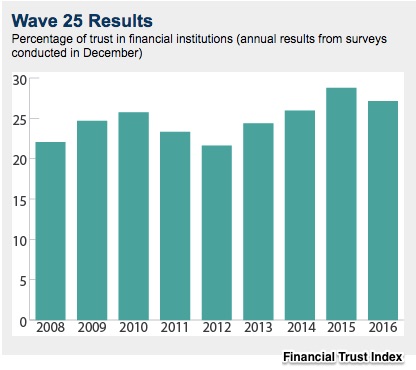 With the 2015 Index, they published a breakdown of banking sentiment. You can see that people had much more faith in local banks than national institutions: 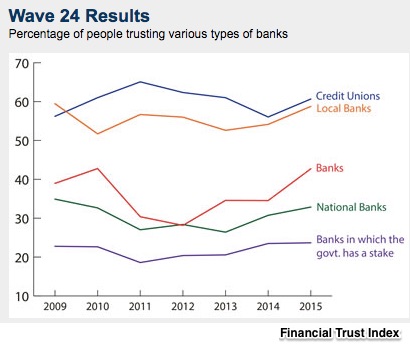 We could say that recent banking legislation reflects our lack of trust. Passed after bailout became a household word, the 2010 Dodd-Frank Act was supposed to remedy regulatory “flaws.” And now the proposed version of the Financial CHOICE Act is supposed to remedy Dodd Frank’s “flaws.”

The “gold standard” though for trust-generating financial legislation was the 37 page 1933 Glass-Steagall Act.

With interest rate ceilings, the departure from investment banking, and a spate of limitations, commercial banks became bastions of conservatism because of 1930s regulation. For the 40 years that followed, a failure was an anomaly. Many predicted the world of Glass-Steagall would last forever.

But then the 1970s arrived. High interest rates, money market funds and globalized banking made Glass-Steagall inoperable. Its demise was formalized by the Gramm-Leach-Bliley Act in 1999.

And now, we are back to where we started.

Composed of 2,310 pages, the Dodd-Frank Wall Street Reform and Consumer Protection Act describes approximately 398 rule-making requirements. Since July, 2010, regulators have been making those rules. They have not quite finished.

Oversimplifying, we can say they had two goals…

Currently being considered by the House of Representations, the Financial CHOICE Act is 600 pages long. Also chock full of rules that need to be articulated, it is supposed to replace Dodd-Frank.

I suspect that if more people read the Davis Polk summaries of Dodd-Frank and the Financial CHOICE Act, their trust would plunge.

My sources and more: Do check out the Financial Trust Index to see the details. Then, for the Financial CHOICE Act, I suggest the Cliff Notes 35 page summary chart at Davis Polk. More than three times as long, they also did a Dodd-Frank summary. Econlife though did have a more compressed version.

Why It's Tough to Solve Traffic Congestion