Rather than a drone (or a person), Domino’s just began using robots for pizza deliveries in Hamburg. 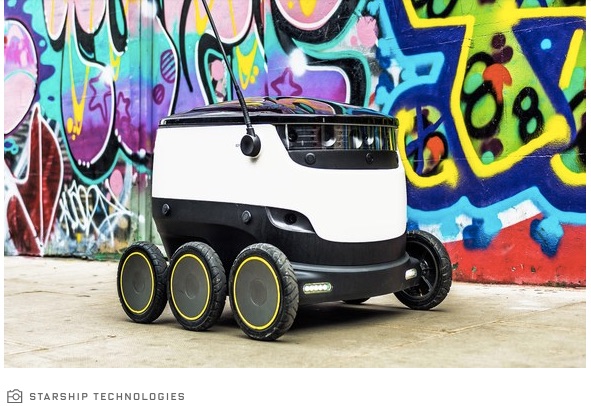 If you live within a mile of your local Domino’s in Hamburg,  a robot might drop off your pizza. Your phone lets you keep track of the pie’s progress and receives a link that unlocks its cargo.

Weighing 18 pounds, the robot has six wheels and travels along sidewalks at four mph. It can manage curbs but not steps. And, with less regulatory oversight than a drone, it might be the best way to navigate the notoriously inefficient “last mile.”

About more than a delivery though, the robots on our city streets will reflect much that is good and bad about automation. While probably increasing Domino’s productivity, the robots eliminate jobs as will our self-driving Ubers and trucks. Similarly, at Amazon, robots are running through their warehouses and at restaurants we’ve begun to use ordering kiosks. Meanwhile, a brief visit to an auto or electronics factory clearly demonstrates that robotics are here to stay.

So yes, robotics fuels innovation and productivity. But also, we have the upset.

Structural change in a market economy is disruptive. Involving the demise of old industries and the rise of new ones, it requires new skills and laws. When entire labor markets are eradicated because of obsolescence, the pain is considerable.

Recognizing the upheaval, the European Parliament recently issued a robotics statement. The document was lettered from A-Z, next AA to AI, and then numbered 1-68 and still there was more.

Initially referring to Mary Shelley and Frankenstein, its content included the need to encourage innovation, preserve human dignity and support small and medium-sized businesses. They also suggested that automation should complement human ability rather than replace it. At the end of a mind boggling array of concerns, they just indicated that their recommendations needed more formal consideration.

You can see where this is going. It appears that no one is quite sure how and if we manage individual robotics automation. And yet everyone is positive that the impact on all of us will be massive.

But do think about England’s industrial revolution or what the railroad did to the U.S. during 19th century. Or we could just recall the jobs that were eliminated and the industries that were created by the auto during the past century.

Maybe now, like all past structural change, robotics automation will demonstrate how the market powers growth.

My sources and more: Starting with Germany’s pizza delivery robots, it was easy to move on to the bigger picture described at Quartz and then to the European Union. For more, this McKinsey report is pretty good and this Ed Yardeni blog has a long list of where we are using robots. But if you read just one article, this Lawrence Summers reply to Bill Gates on an automation tax is wonderful.

What We Don't Know About Taxes