Because of a potato chip shortage, the home of one worried consumer looked like this:

Our story starts during August 2016. Hit by four typhoons in less than a month, Hokkaido’s potato crop was decimated (actually down by 80%). Because Hokkaido is the main source of Japan’s potatoes, snack food makers said they would temporarily stop selling 49 different types of potato chips. Their list included popular varieties like Big Bag Lightly Salted and pizza flavored chips.

Hearing their chips were unavailable, some consumers reacted like panicked bank depositors during the Great Depression. They created a potato chip run: 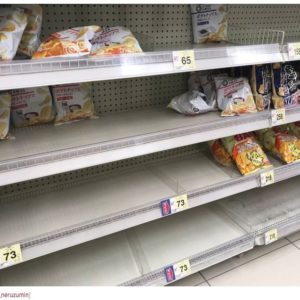 Responding to what the NY Post called a chip lovers “freak out,” Calbee published an apology on Twitter: 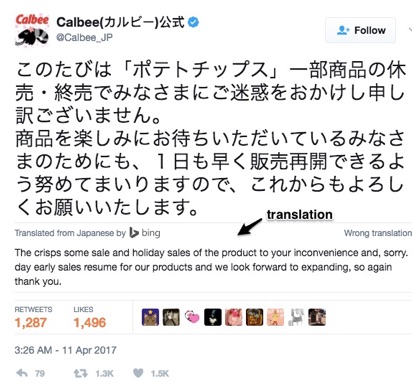 Japan’s reaction to its potato chip crisis is classic supply and demand.

On a graph, we just need to shorten and shift two supply curves to see what happened. We can start with the potato curve. Below, the potato crop is the supply curve while demand comes from chip makers. But in the next graph, the chips are the shrinking and leftward shifting supply curve.

With their smaller supply and higher prices, the graphs explain how potato markets work.

My sources and more: After learning about the Japanese potato chip shortage on Bloomberg radio, I found their summary and a WSJ description of the typhoons. But if you want to read more, this article and Quartz had especially good descriptions of Japan’s “vanishing potato chips” and the broader price and trade implications.