How the Fed Solves the Old Money Problem

I just checked. No hits.

But the results can be interesting.

The Travels of a Dollar Bill

In the Where’s George top twenty list, one bill traveled more than 11 thousand miles between January 2008 and March 2014. Starting at the Minneapolis International Airport, its stops included a resort in Mexico, the Branded Deer Steakhouse in Wisconsin, and a Dunkin’ Donuts in New Jersey. The person who noted the bill’s most recent stop said it was wrinkled and ripped.

Close to its demise, our dollar bill will have an unexpected afterlife. Yes, it will go to a Federal Reserve shredder. However, the Fed has gone green. Or, as a WSJ journalist said, “Money may not grow on trees but the Federal Reserve is helping grow trees out of money.” Instead of sending shredded bills to the land fill, now more than 90 percent of all money becomes compost or mattress filler or fuel at a power plant (like the plant that lights up Pennsylvania’s Delaware Valley). One executive at a home construction business says old money is perfect for cellulose insulation and his customers love to hear there is money in their walls.

You can see below that the Fed is now recycling most of its old money. 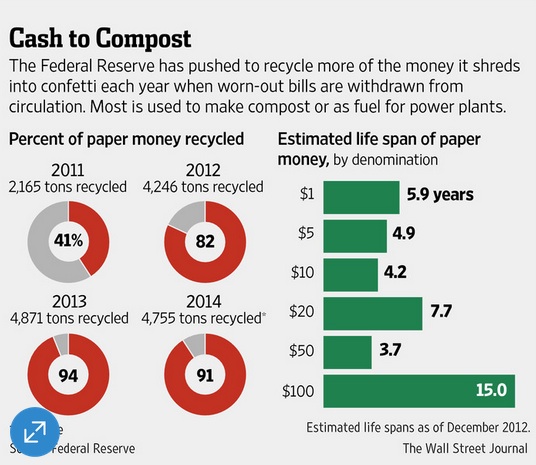 Letting the Federal Reserve know when they have too much paper money (typically after holidays) and when they need more, banks are our source of paper money. After the Bureau of Engraving and Printing produces our dollar bills, the Fed makes sure that banks get the cash they need. In the other direction, banks hand over to the Fed bills that are wrinkled and torn.

You can see below that currency is the largest part of M1. However, in M2, our basic money supply yardstick, the currency component of M1 is a small proportion of the money supply.

How Much Would Santa Earn If We Paid Him?