How Much Would Santa Earn If We Paid Him?

Because checking everything twice, gathering countless toys and driving the sleigh are tasks done not only by Santa but also by accounting clerks, professional shoppers and pilots, we can figure out Santa’s annual income.

Where are we going? To the value of our unpaid work.

The people at insure.com came up with a total of $139,934 for Santa’s annual earnings in 2014. Although their “parallel” occupations are not entirely convincing, still the list displays what the Bureau of Labor statistics records for its national income data. 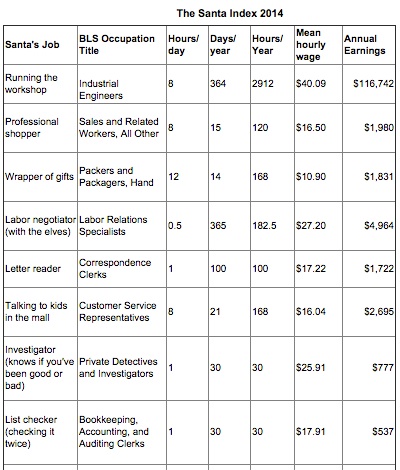 When economist Simon Kuznets created the concept of national income accounting during the 1930s, he was talking about what we now call the GDP. Looking for a metric on which to base a yearly comparison of what we produce, he decided to include only goods and services that could be legally purchased. Less quantifiable, Santa and all unpaid work done in the home were excluded from his formula.

But, what if we did include what Moms do?

Sadly, if you compare the moms and the dads, using BLS stats, the moms would get less for the same job.

By excluding unquantifiable variables, Simon Kuznets eliminated considerable debate about the value of the goods and services in the GDP. After all, do you agree with the list under Mom’s and Dad’s home work? On the other hand, questions about the validity of the GDP as a yardstick of our national well being have increased. Some suggested alternatives resemble the OECD Better Life Index.

What UPS Learned from Henry Ford

How the Fed Solves the Old Money Problem