What An Unemployment Rate Does Not Tell You

As the father of fractal geometry, Benoit Mandelbrot told us that the closer you look at Great Britain’s coastline the more you see. From a distance, it is a curved line. However, looking closely, we see countless indents and zigzags.

Where are we going? To the “indents and zigzags” that a simple-sounding unemployment rate hides.

Below, these eurostats compare unemployment in Europe, the U.S. and Japan.

Idyllic sounding at 3.6 percent, Japan’s unemployment rate tells a different story from a GDP that says they are in a recession. Below, you can see Japan’s GDP contracted at an annual rate of 7.3 percent during the second quarter and 1.6 percent in the third quarter. With consumption leading the plunge, April’s 3 percent sales tax hike might indeed have been a reason.

For European statistics, what I found most interesting was the huge regional discrepancies. Although the overall unemployment rate is near 10 percent, looking closely reveals massive differences ranging from 2.6 percent in Oberbayern, Germany to 36.3 percent in Andalucía, Spain. You can see below, it is not easy being green.

Finally, with a U.S. unemployment rate that was 10 percent in October 2009 and now is 5.8 percent, we can smile as the longest period of diminishing unemployment is continuing to unfold. However, when we compare this employment recovery to others, except for 2001, it does not look quite as good. The graph below compares current employment growth to five other recoveries. 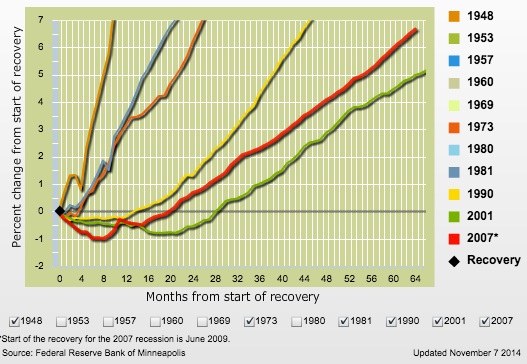 Like the length of the British coastline, behind one unemployment number, there are countless zigs and zags when we look more closely. Then though, as behavioral economist Dan Ariely tells us, “…So we either simplify the problem and offer a solution, or embrace the complexity and do nothing.”

The Bills in Detroit and Elsewhere

Why OPEC is Not as Powerful as You Think