The Bills in Detroit and Elsewhere

At first the Buffalo Bills offered free tickets and $10 an hour for helping to remove 220,000 pounds of snow from Ralph Wilson Stadium. Maybe because of the car ban Buffalo declared after its 88-inch snowfall, the plan did not work out. So, tonight, the Buffalo Bills-Jets game will be played in Detroit.

It wasn’t be as easy as it sounds.

Transporting the Buffalo Bills to Detroit is much more than a plane ride. There were the snowmobiles that brought the players to the team’s HQ, the buses that went to the airport and the charter flight for the coaches, staff and 53 players. An inexpensive Motel 6 was not an alternative because the team needs conference rooms that only a Hilton, a Marriott or some other business-oriented venue offers. Then, you need meal accommodations. Depending on the player, diets vary, even down to the cut of meat and the amount of carbs. Doing all of this at the last minute means a 30 percent hike to an already expensive line on the team’s balance sheet.

The wife of starting tight end Scott Chandler shared these pictures of the snowmobile pickup:

Where are we going? To spending at the margin.

The High Marginal Cost of Travel

Like the pros, college teams spend a lot on travel. When one journalist compared college football teams’ spending in 2011 and 2012, she found that Alabama’s expenses rose by $4.5 million, Notre Dame, by a whopping $6.6 million and Stanford, $6.1 million. Saying that teams are playing more non-conference away games that will increase because of the newly launched College Football Playoff, this journalist attributes the cost hike to travel.

Below you can see what schools spend on their teams. 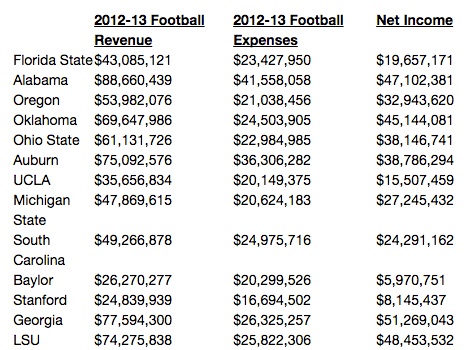 Even high schools have to absorb big time travel expense. School budgets in Texas were inflated by as much as $140,880 when the four schools that qualified for the playoffs had to travel by chartered bus across West Texas. When we add the bands and drill teams that accompanied the teams, altogether we had 1198 students joining what for some were multi-day festivities.

Defined as the line beyond which we do something extra, the margin is everywhere in our daily lives. Creating cost and benefit, decisions at the margin involve when to stay in bed for an extra half hour and by how much to exceed the speed limit. Similarly, pro football team owners, college athletics, and municipal school districts each are experiencing cost and benefit at that margin when they decide how much extra to spend on travel.

What An Unemployment Rate Does Not Tell You