Our Wednesday Environment Focus
We have intentionally created some of the sounds that our technology makes.
Take the beep…
You know that beep..beep..beep sound of a truck in reverse. It all began during the 1960s in Boise, Idaho when Ed Peterson, an auto parts supplier, noted that workers were killed or injured by heavy equipment backups at construction sites. His “can do” response was to develop and market a reverse warning system. First sold in 1967, the noise pollution from back-up alarms has been with us for 47 years although it appears that the beep was not used until the late 1970s.
So where are we going? Created by sound designers as a part of our technology, the beep and its sisters are noise pollution.
Other beeps that are especially annoying include in-car parking sensors. (The car that I drive beeps every time I hit 60 MPH and I keep forgetting to turn it off or move it much higher.) We hear a beep or 2 when we activate and de-activate our car’s central locking system. At the supermarket checkout the beeps from the barcode scanner are unending. And, how about cell phone keyboard beeps and smoke alarm beeps?
The list is long.
Listening to sound designers explain what they do, though, you start to realize that our beeps and other sounds need not be annoying. The goal of the experts is to make the sound feel like it is an “organic” part of its device. The iPhone Tri Tone that has become the universal text message alert was first introduced to indicate a CD had finished burning. Perceived as a simple, happy sound, Apple then used it for texts.

Our bottom line? Many of the sounds that have been built into technology have negative externalities. Uninvolved third parties experience their cost.
Below, you can see how a negative externality adds to the cost of a good or a service. Consequently, its equilibrium price is lower than it would be if the externality were included. 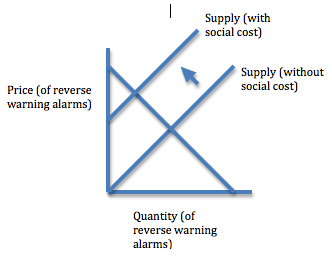 Here is a “beep” Google Ngram. Do you know why the “beep” curve was elevated at the beginning of the 19th century? Please share your “beep” stories in a comment.


Sources and Resources: Having seen a recent BBC News Magazine article on annoying beeps, I immediately went back to a wonderful 99% Invisible podcast on artificial sound. It was also interesting to read the NY Times obituary of the reverse alarm inventor. And, if you want some insight about sound designers, the developer of the marimba text alert details how he came up with the sound. The text alert sound magnificently reflects the elegance of simplicity that requires refining and refining until you reach that perfect point. Finally, last year, we did a fascinating post on church bell noise pollution.

The Income Inequality That Doesn't Bother Us

A Trade Dispute About My Washing Machine