A Trade Dispute About My Washing Machine

I suspect that my new LG washing machine was more expensive than it should have been.
Made by a South Korean firm, this washing machine (and others like it) was the target of a complaint that Whirlpool filed with the US Department of Commerce at the end of 2011. After Whirlpool claimed that US jobs were lost because the Koreans had used subsidies to lower the prices of their washing machines, the US retaliated with high tariffs. With Bloomberg saying that the tariff could have been as high as 82%, US trade policy hit consumers like me pretty substantially and diminished Korean appliance exports to the US by 38% last year.

Responding, South Korea filed a complaint with the World Trade Organization (WTO). As the “forum” for getting trade disputes resolved among its 159 members (Yemen will soon be #160), WTO panels offer trade dispute opinions but have no enforcement power.

In this WTO map, the countries involved in the most disagreements are a darker red.


Below, you can see the number of disputes between the US and The Republic of Korea. South Korea is the complainant in 10 disputes (red) and the respondent in 6 (blue). My washing machine relates to one of those complaints that a WTO panel will consider.

Our bottom line? At the end of a 2002 report from the Dallas Federal Reserve Bank called “The Fruits of Free Trade,” is a chart that conveys the cost of policies that save domestic jobs. For apparel and textiles, 168,786 jobs were saved. The cost though, was $33,629,000,000 or $199,241 per job. Why was the cost so high? Because less competition meant higher prices.
Because of trade barriers, consumers typically pay more than the value of the jobs that are saved.
Do you have a tariff story like mine? Please let us know in a comment.
Impact of a tariff: 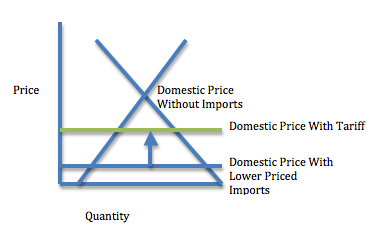 What Signals Does a College Degree Really Send?