The Income Inequality That Doesn't Bother Us

When people talk about the top 1%, they are probably not thinking about NY Yankees shortstop Derek Jeter or Seattle’s MLS forward, Clint Dempsey. For 2014, Jeter signed a $12 million contract and Dempsey makes close to $5 million.
However, they all take us to income inequality.
Using Gini Coefficients, a group from Harvard compared salaries within the 5 major sports leagues. Typically used to measure income or wealth inequality (though it can be handy elsewhere), a Gini Coefficient is a ratio that usually ranges from 0 to 1. Imagine a scale with perfect equality on the left side labeled with a “0” and total inequality at the other end with a “1.” Then Norway, with a Gini Coefficient of .25, would have more of an equitable distribution of income than Brazil with a .55.
For Major League Soccer, the top 1% receives nearly one-quarter of the salary pool. But still, compared to other sports, their inequality is not extreme. One reason relates to what players in the bottom 50% earn. Whereas a group of designated players get a large slice of the salary pie, what is left is divided rather evenly. In addition, salary floors and the size of the team and of the top earners’ slice also affect salary equality.
In the following comparison of Gini Coefficients, MLS is right in the middle of the salary inequality scale.


Wondering whether a non-team sport was as unequal, Nate Silver’s fivethirtyeight then looked at golf: 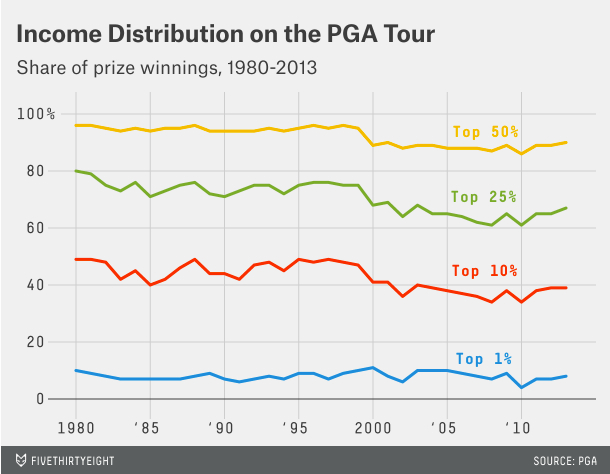 Our last step takes us to the connection between superstar salaries and technology.
Because technology expanded a superstar’s market, performance revenue soared. As NY Times writer Eduardo Porter explained, the relatively small salary of legendary soccer player Pelé related to the size of his audience. In 1958, there were perhaps 350,000 TV sets in Brazil. But think 2014 and the Brazilian World Cup. The aggregate audience will be billions with hundred of millions of people watching a single game.
Our bottom line: Although athlete superstar salaries do not concern most of us, they too are a top 1% that the market system has created.
Is your opinion of sports salary inequality similar to your general outlook on income inequality? Please let us know in a comment.
Sources and Resources: For their look at sports salary inequality, I recommend Nate Silver’s fivethirtyeight, the original Harvard paper and then for further analysis, Eduardo Porter’s chapter on superstars from The Price of Everything. In so many ways, the issues are about the basics of capitalism. Also, here are OECD Gini Coefficients.

Gender Issues: Another Way to Estimate the Cost of Children