When a Starbucks Custom Drink Is Excessive

At Starbucks, I always order a dark roast grande pour-over with a shot of espresso that drips somewhere between 18 and 22 seconds. Although that is the normal drip time, I ask them to check because their espresso machines malfunction.

It appears that my custom beverage was typical. According to Starbucks, 75 percent of its customized drinks have fewer than three “unique modifications.”

The problem is the other 25 percent.

The 13 components of “Edward’s” customized drink went viral after a Starbucks barista tweeted a complaint:

As you can see, his venti Caramel Ribbon Crunch Frappuccino had 13 additions that included seven caramel sauce pumps and one that was honey blend. I am not sure what the 5 banana refer to: 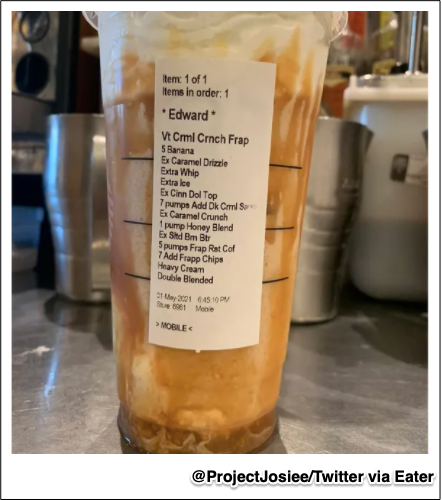 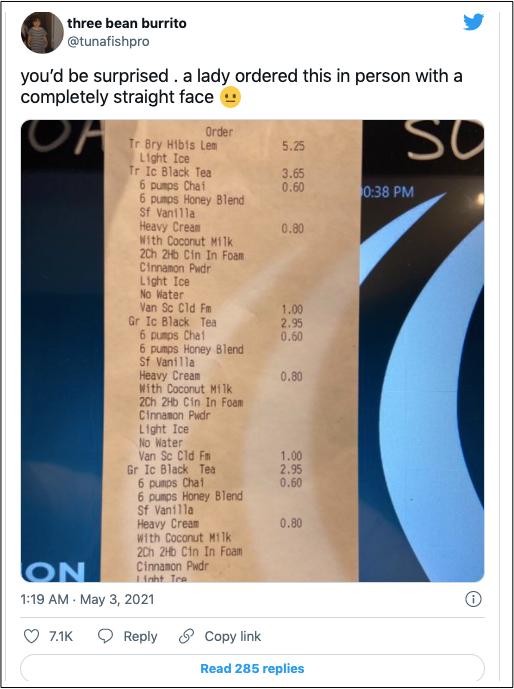 At a slew of fast food outlets ranging from Starbucks to Chipotle and Panera, diners are doing some outlandish customizing. Inside Chipotle, you have an assembly line of ingredients to choose among for your burrito but to-go is tougher for employees. While an app can make it easier to order, it creates complexity for the staff. Starbucks says that sometimes the ingredients won’t fit inside the cup.

Predictably, the chains try to give customers what they want. Customizing is one way that firms can compete.

When most of us eat four large chocolate chip cookies, the first tastes blissful and the second could be wonderful. Soon though, the extra enjoyment fades with the third and fourth cookies. Defining marginal as extra and utility as satisfaction, an economist would say that we are experiencing diminishing marginal utility when we eat multiple cookies.

Similarly, people that order excessively customized drinks could be adding less and less good taste from 10 pumps of syrup or eight different ingredients.

My sources and more: There are many articles about excessive orders. Eater described what people request at Starbucks while Insider took us to Chipotle.

What Makes a Dressing French?

What a Monkey Knows About Risk