Deciding Who Won’t Get a U.S. Check

Some of us are worried about December 3 and December 15.

Until December 3rd, federal agencies, expiring programs, and other spending necessities, get the money they need to continue operating. Called a CR (Continuing Resolution), the spending okay expires in two days. Meanwhile, a debt ceiling agreement unravels on December 15.

To solve the first half of the problem, the Congress could again pass a CR–a Continuing Resolution–that again temporarily okays federal spending and avoids a government shutdown. Similar to the current CR that lasts from September 30 to this Friday, a new one might take us into March. While there are other possibilities, the CR is most likely.

A CR would continue the budget’s mandatory and discretionary spending: 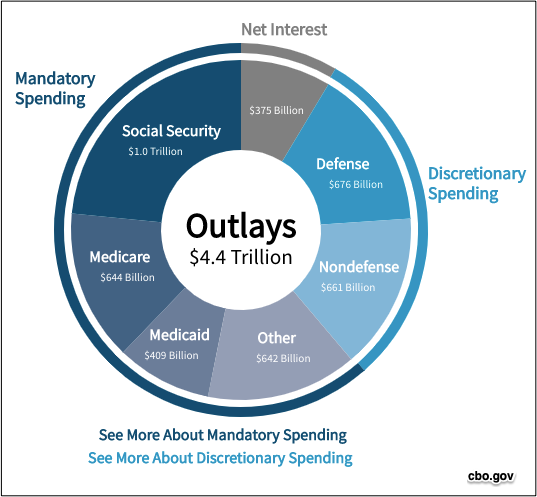 Our debt ceiling story starts during August 2019 when the Congress said to forget it for awhile. Then, after that suspension expired in October, the Congress allocated enough ($480 trillion) for the U.S. to observe its financial obligations. The $480 billion runs out on December 15.

Right now, at $28.4 trillion, the debt limit is the maximum amount the U.S. can use to pay its existing bills. Once we hit the limit and cannot borrow anymore, we have to find more money somewhere. The possibilities are current revenue and cash on hand. In addition, we can cut non-necessities. Soon depleted, “these extraordinary measures” are not enough.

To continue paying back what we owe, we need a higher ceiling.

Any time U.S. spending exceeds revenue, we have to borrow to make up the difference. Rather than borrowing from a bank like you and I would do, the U.S. government sells different kinds of bonds and bond-like securities. The buyers are businesses (including banks), countries, and you and me. By buying a bond, temporarily, we are giving the U.S. government money. The government then allocates it through the U.S. budget’s mandatory and discretionary spending parameters. We are willing to lend the money because, in return, we get interest payments. Also, the U.S. has been a dependable borrower. Since it always pays back what it owes, most of the world is happy to loan it money.

If the debt ceiling is not raised, we will have a shortfall because our spending exceeds our revenue. The result is some choices. We will have to decide who gets a check. Returning to the above pie graph, who would you choose?

My sources and more: For a debt ceiling update, Vox was a handy source. From there, firsthand, we can look at the CR that Congress passed approximately two months ago. Then, for more of the debt ceiling story, do take a look the Whitehouse Explainer and at econlife, here and here.

The World's Priciest and Cheapest Cities