If you needed a doctor or a lawyer in 1960, it is likely that you would have called a white man. At 94 percent, white men dominated both professions. Or, we can just think of former Supreme Court Justice Sandra Day O’Connor. Third in her 1952 class at Stanford Law School, she was hired as a legal secretary when she graduated.

So yes, whether using a macro or micro lens, 60 years ago, we would have seen an immense underutilization of talent. Since then, a lot changed. But still, the GDP was not where it could have been.

Looking back at job markets in a recent paper, researchers asked about labor and human capital discrimination. Their answers concluded that less labor market discrimination and lower educational barriers were responsible for wage growth among women and Black men.

However, the big difference was human capital. Much more so than diminished job discrimination, fewer educational obstacles propelled occupational diversity. By sorting people into the proper jobs and shrinking inequality gaps, everyone benefited. Economists calculated that incomes increased as did the GDP per person, perhaps by slightly more than 40 percent since 1960. But still, white women gained the most.

And that takes us to a second study.

Citigroup’s newest Global Growth report presents (in 104 pages), “The Economic Cost of Racial Inequality.” Emphasizing the numbers, it shows us why, in Martin Luther King’s words, “…Whatever affects one directly, affects all indirectly.”

The Citi Report quantified inequality by looking at wages, housing, education, and lending: 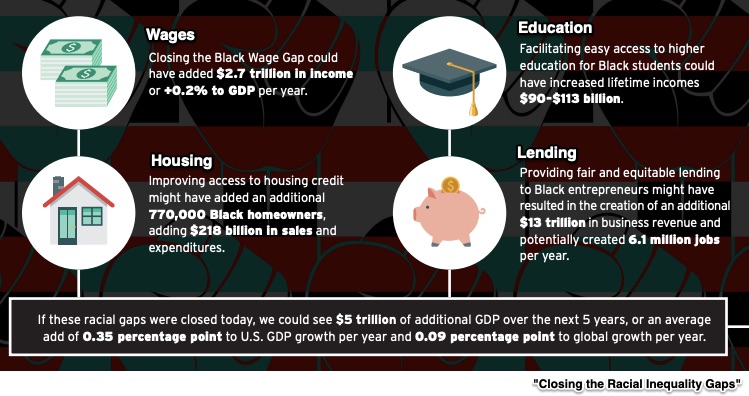 More specifically, elevating Black access to education increases lifetime income, From there, we have higher wages and more consumption and investment spending that ripple through the economy. As for home ownership, again, higher Black spending would expand economic activity. And finally, the gap in lending to Black entrepreneurs results in diminished innovation, less business revenue, and fewer new jobs.

Racial and gender inequality gaps have a very practical side. They directly impact the Consumption component of the GDP through the goods and services we buy. Similarly, Gross Investment increases through residential housing and business spending. And even Government Spending is affected through the talented human capital we would add and less need for certain entitlements like Medicaid. As for our last GDP component, net exports, I won’t speculate.

I do worry though whether we can accurately estimate how diminished inequality gaps elevate the GDP. But we can be quite sure that the inequities are real and their reversal would have boosted the economy.

My sources and more: I recommend taking a look at our first paper from the University of Chicago and Stanford and the second, from the banking behemoth Citigroup. Then, for more, Bloomberg did an overview and this Econtalk interview focused on Black entrepreneurs and inventors.

Our featured image was the cover picture in the Citi Report.

Deciding What to Deposit In a Food Bank