Both are close to 5 percent (and there are even more named James):

Then they tell us that only 3.3 percent of all men are named John whereas 50.8 percent of the population is female.

Where are we going? To the CEO gender gap.

On April 6, IBM’s female CEO, Ginni Rometty, will be stepping down. When she retires at the end of the year, she will also no longer be the firm’s executive chairperson.

For the S&P 500, her departure keeps the number of purple dots (representing women) close to five (with each dot at 1 percent):

Although the number of female executives is up. most have not taken that last step to the top.

Solving the Mystery of the Disappearing Female CEO

A WSJ graphic showed us why more women are not the CEOs of major corporations. The key is occupying a “rainmaker” position. The people who bring money into a firm tend to move to the top. They come from sales, successful divisions, operations. Women instead lead Human Resources, legal departments, administration.

You can see the executive positions with the most purple dots do not have that pathway to the top: 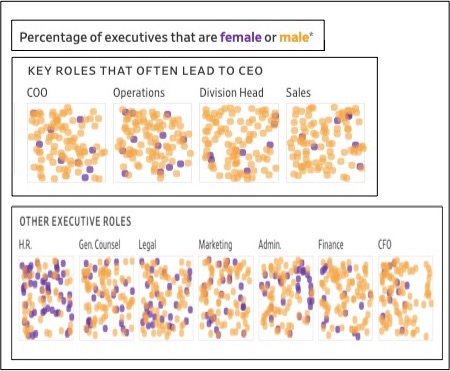 At 27 percent the proportion of women on S&P 500 boards of directors is up from 17 percent in 2012.  Perhaps adding to gender equality, California mandated that publicly traded companies based there have at least one women on the board by the end of 2019. By 2021, the number rises to three on boards with six members. Claiming it is unconstitutional, a California based company shareholder is challenging the law in the courts.

And that returns us to the Glass Ceiling Index. Maybe with more female board members, we will see female corporate leaders and hopefully elevate more women to CEO.

My sources and more: This WSJ article reminded me it was to look again at female CEOs. Meanwhile, the Washington Post had the facts on the California board mandate and the NY Times had the Glass Ceiling Index. And, as always, do take a look at Catalyst for the numbers.