Many of us believe that future Social Security beneficiaries won’t receive full benefits. We also expect to have to work beyond age 70 to have enough for retirement.

According to a 2019 Pew Survey, benefit cuts are not the answer: 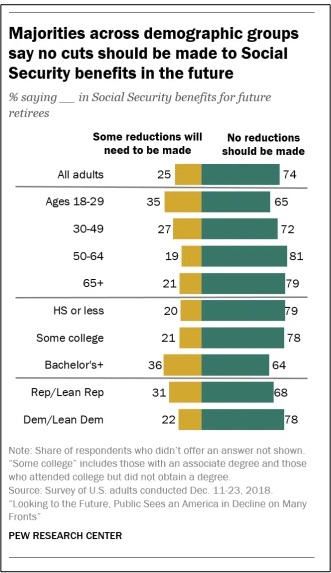 But what about saving Social Security?

In their 2019 report, the Social Security Trustees told us that insufficient tax revenue will lead to diminished benefits after 2034. Like many other countries, we are living longer and having fewer babies. For Social Security, that means more beneficiaries and proportionally fewer workers. It means 2.2 workers for each beneficiary instead of the 5 to 1 ratio in 1960. Add low interest rates and sluggish economic growth and you get pension problems that are tough to solve.

We can group the possible fixes into three categories. The Congress could increase the revenue we pay to the system. They can change the benefits. Or, they could reach into a miscellaneous grab bag of tweaks.

What you prefer can depend on the tradeoffs you are willing to make.

You might be most concerned with people who were unable to save for retirement and believe they deserve more. Some want to minimize taxes; others say raise them. You could care about retaining what has existed since 1935 or make a clean sweep with a new kind of program.

Currently our payroll tax has an income cap. In 2020, you will pay (or split with your employer) 12.4 percent on no more than $137,700. While the cap usually increases yearly, instead, the fix could be no cap. Also, the rate could ascend or other items could be taxed, not just income.

Benefits could go up or down. It all depends on whether you want more for those who have less or less for everyone or more for everyone.

These are some alternatives presented by the Democratic contenders for the presidency. (A COLA is a Cost of Living Adjustment. The COLA for 2020 is 1.6 percent.): 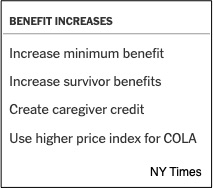 This is the current age structure of Social Security. Not listed, people can start collecting benefits at 62 but then get a lower monthly check: 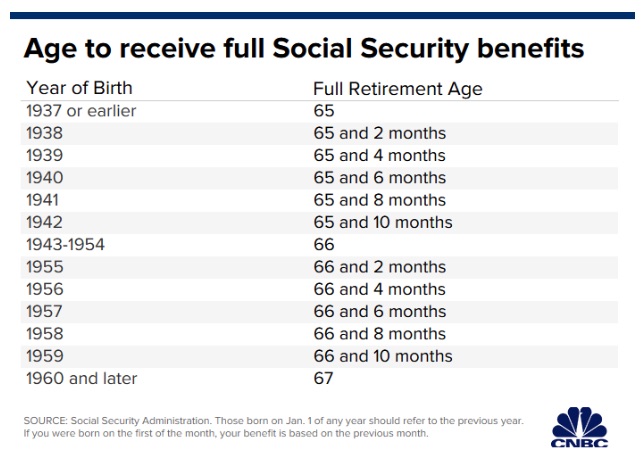 The candidates’, the President’s, and the Congress’s position on entitlements reminded me of public choice theory. First developed by Nobel economics laureate James M. Buchanan, public choice theory explains the negative externalities of a politician’s self-interest. Because politicians engage in utility maximization, they might cater to voters who ignore national well being.

Neither President Trump nor any of the Democratic candidates has proclaimed support for a benefit cut. Instead, expressing nothing specific, President Trump said he would protect the system. Meanwhile, WSJ summarizes the most recent Congressional reversal that has slipped toward higher deficits and no cuts.

WSJ tells us that Social Security is a “political challenge” and a “math problem.” Each has a different correct answer.

My sources and more: To start, Pew told us what we want. Next, the basic facts about the future from the Social Security Trustees Report 2019 came in handy. Then, we have the debate. The American Prospect has an excellent foundation for deciding what you do and do not like. And the NY Times and Boston College had the details about candidates’ proposals. Then, this WSJ article had facts about Congress. Put all of this together and you see why Social Security has been called “the third rail of American politics.”