Perhaps you remember when La La Land very briefly was named the Best Picture at the 2016 Academy Awards. Warren Beatty and Faye Dunaway had been given the wrong card.

The reason for the mixup was rather similar to the cause of the Iowa caucus crisis and also the 2008 financial meltdown.

Our story starts in 1638. Explaining why a massive marble pillar cracked, Galileo had an answer that extended far beyond a building. The pillar had been stored by workmen who decided that two stone pile supports at either end were good but a third, under the midsection, would be even better. Then though, an end support settled, sunk, and a slightly slanted pillar cracked in the middle. The mid-support was the apparent cause of the crack.

Complexity increases the chance that something will go wrong. Then, when it happens, the tight coupling guarantees a cascade throughout the system. The problem though is the safety device. With extra precautions–like a midsection support–we get more complexity.

At the Academy Awards, we had a cascade of errors. First, planners made the system more complex by requiring duplicate award cards. On the left and right sides of the stage, a person had the same card. Once the award was announced, the other card was supposed to be removed. Instead, it was accidentally handed to Beatty and Dunaway. Then, to make it all worse, the design of the card was misleading. Although the mistaken card was for Best Actress, it said the name of the film in large letters towards the top.

In Cautionary Tales, economist Tim Harford names a list of complex tightly coupled situations that became catastrophic. At a nuclear power plant near Detroit, regulators mandated an extra filter. Unexpectedly shifting, it blocked the coolant flow it was supposed to preserve and caused a partial meltdown. Somewhat similarly, a 2008 meltdown started with a safety device. This time though it was “malfunctioning” insurance packages that helped to start a financial meltdown. The insurer, AIG, could not cover its obligations when all started to collapse at once. For each, the precaution’s complexity helped to precipitate a disaster that rippled through a tightly coupled system.

As for Iowa, a defective app was not really the cause of the meltdown. It was again complexity and tight coupling. There was a Plan A that had the app as the centerpiece for approximately 1700 precincts. But the app required practice runs that never happened because of security concerns. Then, when it malfunctioned, the cascade began and Plan B was even more complex. Involving hundreds of calls to a caucus “boiler room” in Des Moines, verifications, logins, codes, smartphones (that had been prohibited) and spreadsheet images (below) were all in the formula.

A photo of the vote at just one precinct: 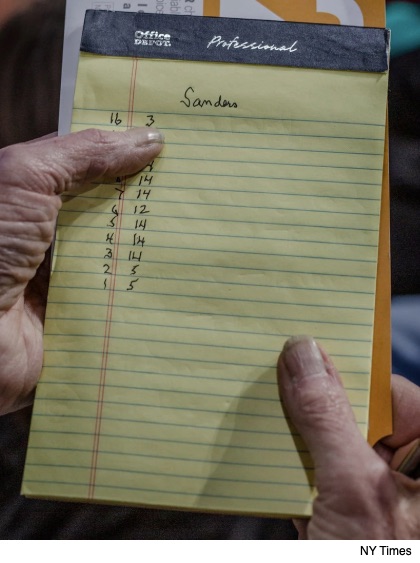 Defined as where we have something extra, the margin divides what we have done from what we can do next. Economists like to say that we always make decisions at the margin. And, each of those decisions involve tradeoffs. Each has benefits and costs.

At the margin for a precautionary device, we have to decide if the extra complexity will help with preventing accidents. After the La La Land debacle, a third duplicate card was added to prevent a future mistake. Galileo might have said they just created more complexity and were destined again to have a problem.

As for Iowa, they are still trying to figure out what went wrong. Galileo could have told them.

My sources and more: Yesterday’s walk was more pleasant because of a Tim Harford Cautionary Tales podcast. I also recommend the NY Times for the Iowa details. However, if you read just one article, do look at this one.

Deciding What We Mean By Socialism