New Orleans has a scofflaw who owed $19,080 in fines for 296 speed-camera tickets. He just doesn’t pay them. He (she?) is one of a small group of people in cities with automated speed cameras who ignores them. The camera’s goal is primarily safety. It also can provide a revenue stream. For these repeat offenders it is neither.

Where are we going? To ranking cities. But first, to Sweden.

The Swedish Parliament decided in 1997 that it wanted to improve road safety. Ignoring economics, they said cost and benefit were not primary. A high cost to save a life was okay. Safety would be number one. The key though was recognizing that people were going to make mistakes. Pedestrians and drivers were going to text and talk on their phones.

But good design could minimize the impact of human error–of activities like texting and talking. The road system could have more roundabouts that slow us down, It needs lower speed limits, more speed cameras, and some speed bumps. Called Vision Zero, the road safety initiative brought Sweden’s traffic fatalities down from seven deaths per 1,000 people to fewer than three. We could say that they had a good return on their investment.

Speed cameras were a part of New York’s Vision Zero. When a camera caught it, drivers exceeding the speed limit by 10 mph got tickets.  However, because the cameras just captured a license plate, the consequence for the drivers was minimal. As a result, the frequent offender rate was relatively high.

You can see below that, except for Denver, fines and points seem to correlate with frequent offender rates: 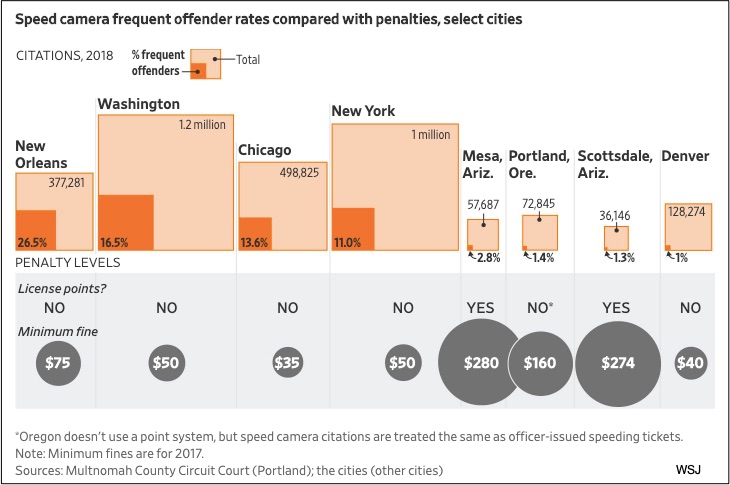 And this is how much revenue they generated: 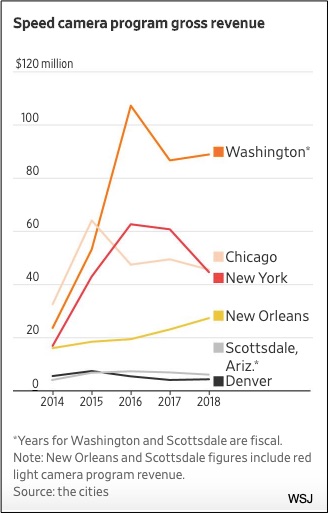 Like investors calculate their return from an investment, cities can compare what they spend on speed cameras to diminished fatalities and elevated revenue.

Much more broadly, WalletHub calculated the ROI (Return On Investment) for 150 U.S. cities. Yes, the metrics are totally debatable. The categories, the weight, and the fraction they create might or might not be valid. But it is worth pondering so let’s take a look.

WalletHub got its ROI by comparing the quality of services that citizens received to what the city spent to get it. They selected six categories, got a numerical score, and then divided that score by the city’s per capita spending.

These were the “Quality of City Services” categories. Each could get a maximum 16.67 points:

Two of the top five cities that gave citizens the biggest return from their spending were in Idaho: 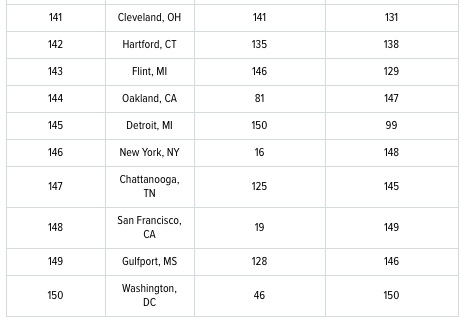 However, if we just look at the quality of services scores, New York winds up at #16 and San Francisco, #19.

This was their safety category: 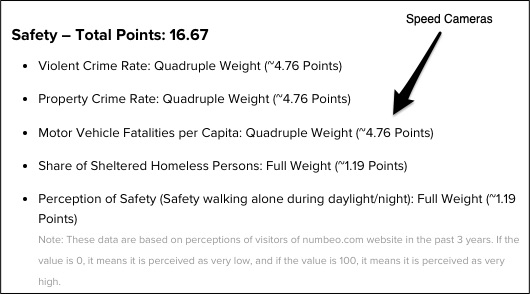 I wonder if they included speed cameras.

My sources and more: The WSJ front page has become increasingly interesting. Yesterday, their discussion of speeding tickets took me to road safety, municipal finance, and Vision Zero. Lastly, as did I, you also might want to check out Sweden’s traffic safety initiative.