On Christmas Eve, Santa does not have to visit every country in the world because he is not the only gift bringer. Some children expect elves or trolls, some do not believe in Santa, and some have gifts delivered on a different date. Still, adding together all the countries Santa will visit on the 24th, his task is rather daunting.

Experts have estimated that he covers 50 million square kilometers at nearly 10,000 kilometers per hour to visit perhaps 160 million children during approximately 25 hours. He has to stop, drop off each of his 20 tons of presents, then accelerate again. That speed could create massive aerodynamic heating, sonic booms, and 10 Gs of force.

For all that he does, Santa’s earnings would not come close to the top one percent’s $421,926 threshold.

We can calculate Santa’s annual income because he isn’t the only one who checks everything twice, wraps toys, and drives a sleigh. Since accounting clerks, professional shoppers, and pilots do (sort of ) what Santa does, we can look at what they and other comparable occupations earn.

This is how insure.com calculated Santa’s earnings: 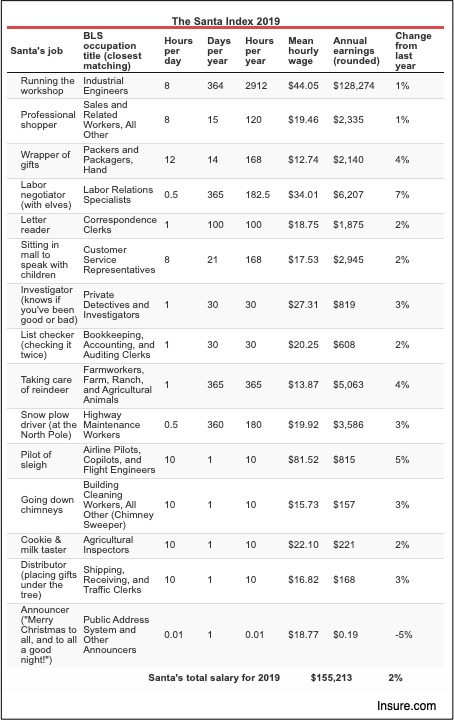 To find wage gains, we can go to the BLS (Bureau of Labor Statistics).

In their December jobs report, we are told that, at $28.29, average hourly earnings for private non-farm workers are up by 3.1 percent. However, when we look at real earnings–inflation adjusted–the number drops to 1.1 percent. 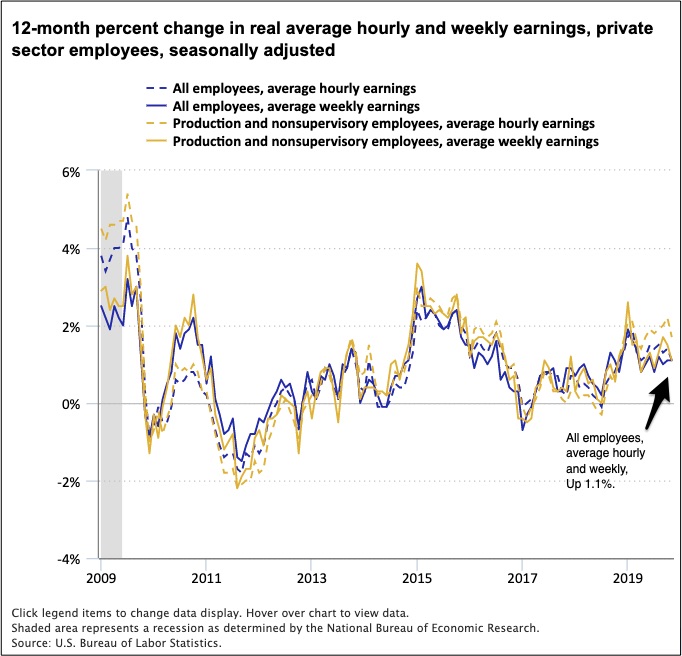 The big question is why. Why are earnings up so little when, at 3.5 percent, the unemployment rate is so low? In theory, firms should be boosting wages to keep employees in a tight labor market. And yet, wage growth seems to be decelerating.

Actually, everywhere I looked, there was a list of possible reasons. The one common thread was that we just don’t know.

But we do know that like many U.S. workers, Santa can complain that his earnings are not rising fast enough.

My sources and more: For a clever analysis of Santa’s deliveries, this BBC More or Less podcast was interesting as was this insure.com estimate of Santa’s salary. Then, for more confirmable data on wages, do go to this BLS summary page, their December jobs report, and CNBC. Finally, if you just want the analysis, this Robert Samuelson column in the Washington Post is excellent.

Please note that this is an entirely revised updated version of our December 24, 2018 post.

Why The Eddie Murphy Rule is About More Than Orange Juice