Long ago, economist Joel Waldfogel told us the downside of gift giving. As we explained at econlife, a mismatch between what the giver expected and how the receiver felt could diminish the gift’s value by as much as one third. The result is a deadweight loss that adds less to our economic activity than we think. Indeed, when we recognize that the winter holiday season is a hefty chunk of the GDP, we certainly would not want to chip away at its value. So Dr. Waldfogel concluded, it’s better to give cash or maybe a gift card.

The Value of Gift Giving

In an experiment conducted differently from Waldfogel’s college survey, two other economists used an auction. Their approach led to a flip. It said that gift giving added value, as much 35 percent. Here though, they injected a new ingredient. They assumed that “total value = material value + sentimental value.”

Then, adding ammunition to the anti-Waldfogel contingent, a University of Chicago panel chimed in. Through their survey, the majority concluded that gift giving signals caring. From there, they took the leap to added value.

For a smile, do take a look at economist Austin Goolsbee’s response:

And these were the results of the University of Chicago economists’ vote: 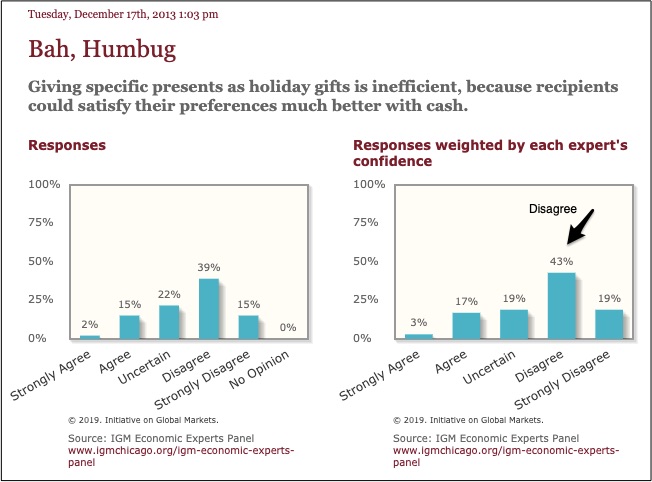 Because certain holidays have their own rules and norms, they too are institutions. Thanksgiving has its turkey dinners and Easter, the eggs.  A World Bank economist explained why, among the poor, festivals in India like extravagant weddings and village celebrations are institutions that preserve social networks and shape identity.

If you celebrate Christmas, you decorate your tree, you invite friends and family to your home, you give gifts. Even demonstrated (sadly) by those inflated lawn Santas that were invented by an entrepreneurial Texas business person who saw the potential of huge gorilla balloons over car dealerships, Christmas is communal.

So yes, gift giving is about so much more than the present.

My sources and more: Rather serious economic debate followed the Waldfogel paper. It included a University of Chicago survey, this comment from List and Shogren, this Economist column, and this World Bank discussion of the role of celebrations in India. Related, this St. Louis Fed podcast talks about the value of holiday spending.