How To Make Kids Smarter

Sesame Street first aired during 1969. At the time, most little kids did not attend preschool. As the first children’s show where they could learn their letters and numbers, it was an immediate hit.

Do look at least at the first five minutes. You will see why:

Sesame Street is one of the first examples that TV could be an educational tool. But the opposite was true too.

When Sesame Street first aired during 1969, it had an educational and cultural mission that was new for TV. Hoping to diminish the preschool educational gap, Sesame Street most impacted young boys and African American children. For three and four year olds,  1970s data indicated that the letters and numbers on Sesame Street made a difference.

Now, researchers are again showing how Sesame Street affected kids’ subsequent performance. Their focus was elementary school, high school, and beyond in labor markets. Using data that starts with the cohort that was born in 1959, this is the group they studied:

You can see that some would have been in school when Sesame Street first aired while those who were six and under probably were not. As a result, they were able to compare the two cohorts. The focus was “grade-for-age” status. Sesame Street enabled young children from groups that had been below grade level to maintain it, especially African American boys. As for the longer term positive outcomes, researchers say they are less conclusive but somewhat evident.

In Norway, we can also see how TV watching affects learning. But here, the message tells us that it all depends on what you watch.

After cable TV arrived in Norway in 1981, Norwegian teenagers and young adults with less schooling turned on the TV. Compared to more limited previous programming, the shows were much less educational. Researchers have consequently concluded that Norway’s decline in I.Q. scores can be attributed to those cable TV shows.

As with Sesame Street (but very differently), TV watching impacts the I.Q. scores for boys more than for girls but here it’s because the boys had more reading time crowded out. Researchers also observed lower high school graduation rates for the boys but not for girls. (They had no I.Q. data for the girls.) 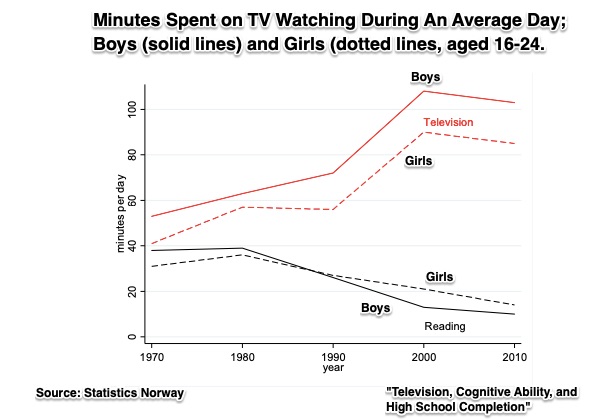 As economists we can explain why Sesame Street mattered. One of the three factors of production (land, labor, capital) that make up all goods and services, capital can be divided into physical capital and human capital.

Physical capital refers to the tools, equipment and buildings that are people-made. The word investment is typically used with physical capital to indicate we have added to the existing stock. As new computers or a new plant, our extra capital could have boosted productivity.

Similarly, we can invest in human capital. Then though, we can increase productivity and the GDP by adding to people’s knowledge and skills.

And that returns us to Sesame Street and the programming that invested in children by adding to their human capital (and Norway’s cable shows that did not).

My sources and more: Thanks to the NY Times for its Upshot column on what we watch. From there, the papers they reference are here, here, and here. Lastly, I thought you might want to peek (as did I) at how much we watch TV through these BLS statistics. But actually, if you look at just one thing, do return to the first Sesame Street program link in our post. It is wonderful.

Sections of “Our Bottom Line” were in a past econlife post.

How To Become Happier