What Female Soccer Players Hope to Win in Court

Yesterday, the U.S. national women’s soccer team “thumped” Thailand. The score was 13-0. Yes, the game was a mismatch but also it reflected the performance of U.S. National Women’s Soccer. The women win; the men lose. The women attract huge fan excitement. They generate considerable revenue.

But the women are paid less.

In a document filed with a California District Court, the team tells us that the WNT has three World Cup Titles and four Olympic gold medals. Ranked #1 for 10 of the past 11 years, they had an unprecedented 23 million viewers watching the 2015 World Cup title game. They also generated Federation profits when none were projected.

Then, in a list of 114 items, they cite inequities that relate to pay, turf, travel, and promotion. The women get a lower salary, a lower amount for non-tournament games, and nothing extra when they play more. Sometimes the women had to win to get paid while the men did not. After losing in the 2014 World Cup Round of 16, the men’s team got $5,375,000 in performance bonuses. Meanwhile, for winning the entire tournament the next year, the women got $1,725,000. The women have played on artificial turf more frequently than the men. The women fly charter less often than the men. The women’s games are less vigorously promoted than the men’s games.

Below, you can see one example of the pay gap: 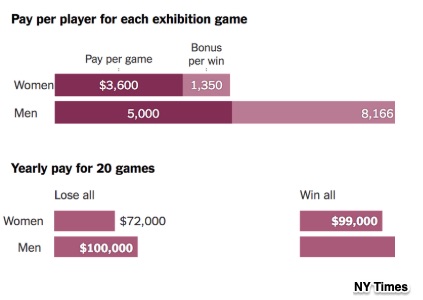 We can divide the gender pay gap between what is and is not measurable. Pew Research tells us that women have narrowed the gap through more education, fewer segregated occupations, and work experience. However, there still remains the unquantifiable category they call discrimination: 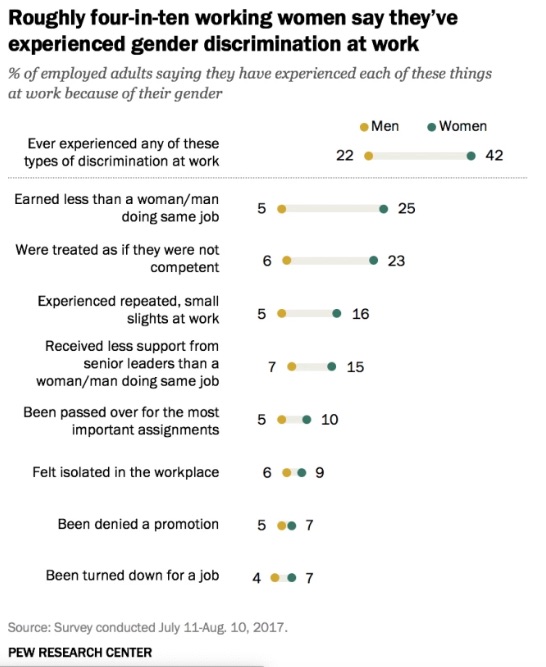 Female soccer players do what their male counterparts do. And yet, the U.S. Soccer Federation has said there are “different pay structures for performing different work.” I suspect they are really just displaying discrimination.

My sources and more: This NY Times article reminded me it was time to update the soccer pay gap. From there, for more detail, the Atlantic, The Washington Post, and Money.com are possibilities. But Vox and fivethirtyeight were the most up-to-date as was this Pew Research analytic anchor. Finally, here are the legal documents.

Our featured image is from the NY Times.