The One Investment That Is (Probably) a Sure Thing

It still makes sense to go to college.

When you see a return that is just under 14%, you know that the benefit of a degree exceeds its cost:

But it’s not really that simple.

The Value of College

Exceeding the rise in most other household expenses,  the college “sticker price” and the tuition we actually paid during the past 25 or so years are way up. Since the 1970s, the yearly tuition for a bachelor’s degree (the sticker price) more than tripled from an inflation adjusted $5,000 to $18,000 today. (We don’t include room and board because we need a place to sleep and eat whether we are in school or not.)

Correspondingly, what we really spent during four years went up to an average of nearly $32,000: 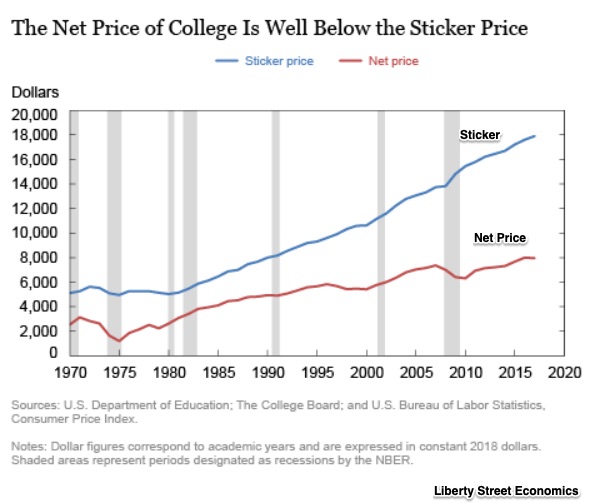 However, we sacrifice so much more than the $32,000 that we spent when we consider the $120,000 in wages we could have earned. Defined as the next attractive alternative that was sacrificed because of a decision, the opportunity cost of college is those wages we never earned. Below you can see that because wages have climbed since the Great Recession so too has our opportunity cost: 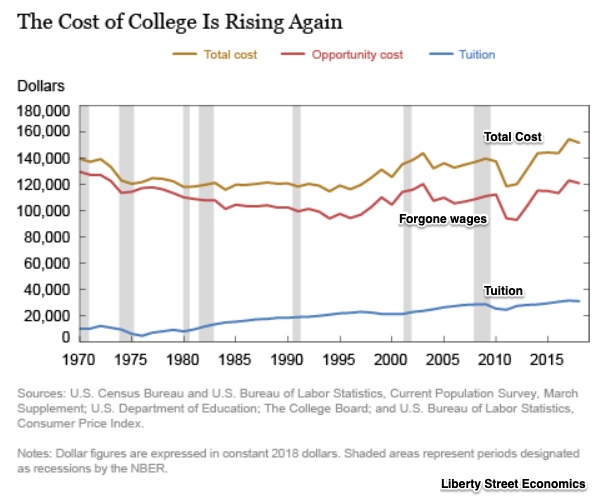 Together, tuition and fees were up 30% during the past seven years while sacrificed wages also substantially rose. However, if we earn enough because of a college degree, then the high cost is worth it. 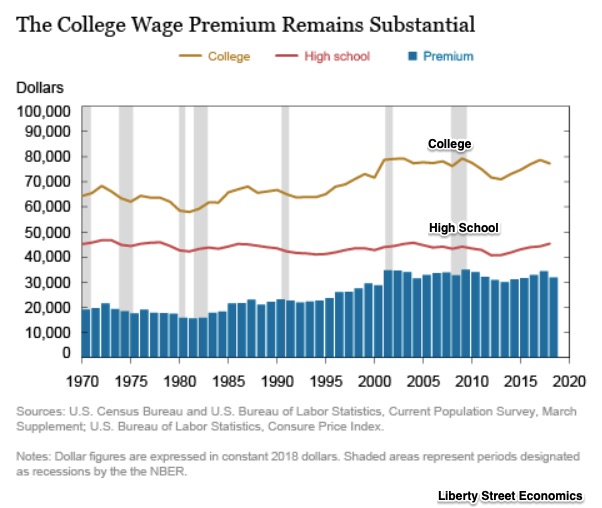 Some scholars have noted that college is a lot more than learning. A George Mason professor said it is a signaling device. By graduating from college, we tell the world that we have the skills we will need in the labor force. We were admitted by a respected institution, we attended classes, and we passed exams. We had the tenacity to stick with a goal for four years. Consequently, students lacking the qualities they need to finish a four year college are “filtered out.”

Also though, shown by a recent WSJ “longread,” the debt side of the college equation is daunting. With graduates averaging loans of $34,000 per person, our debt is massive. And close to 41% of all recent grads are underemployed, working in jobs that do not require a college degree. Furthermore, years of debt represent an incalculable burden that was not added to the cost of college.

So, the cost, the benefit, the earnings premium, signaling, and debt from college make calculating the return from a college degree more than the math.

My sources and more: Always good for solid analysis, the NY Fed’s Liberty Street blog took a look at the value of college, here and here. Then, more stats are here and WSJ could come in handy for the student debt facts.