According to the numbers in a Nielsen survey from last January, we are still buying real Christmas trees. But the real tree numbers have plateaued while fake tree sales are climbing: 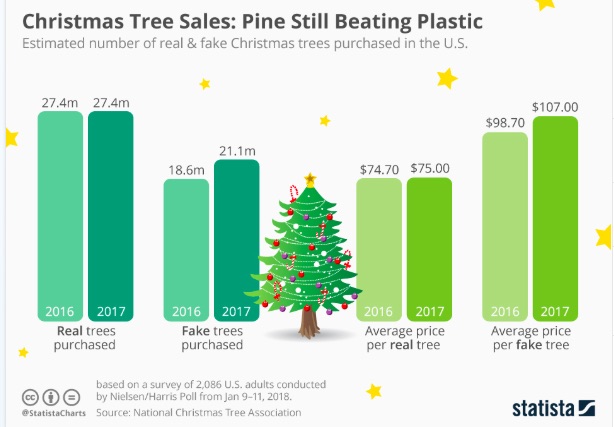 Meanwhile though, approximately 80% of the trees we display will be artificial because we use the same ones year after year. Explaining their preference, fake tree lovers said they are more convenient, storable, and allergy-friendly. Several also reported that cats have a tougher time toppling fake trees.

So, fake or real?

This is what the real tree people say…

Through real Christmas trees, Amazon sees new territory. The podcast Prime(d) tells us to imagine a flywheel. To get its imaginary flywheel moving faster and faster, Amazon needs a continuing series of small pushes from new consumers. This year, they hoped to get that push by luring people away from tree farms and farm stands. Once Amazon captures that Christmas tree buyer, it gets the decorations sales too.

So, at this year’s trade show for Christmas trees, Amazon showed up. A bit late. Amazon saw farmers who had already locked in their sales. But they did order some from East Coast growers and they figured out how to mail a dry tree. The result? This year was a sell-out.

The tree farmers are happy to have Amazon take them online to where the customers are going. Christmas tree growers surely get worried when a majority of survey participants say they prefer fake. So, when they look at their trees, they see a threatened commodity that needs some support. Amazon was one solution.

Support also came from the environment.

Think fake Christmas trees and you have everlasting plastic. Think real and you mulch, you compost, you recycle them into wildlife habitats. Although a typical tree could take seven years to grow, after it’s cut and used for Christmas, three seedlings reputedly replace each one. In NYC alone, the 242,000 (or so) trees that were chipped by the Sanitation Department were used in parks, gardens, and other similar destinations.

Thinking economically, we can pull all of this together with one basic idea. Economists like to say that our decisions usually involve tradeoffs. Certainly selecting between artificial and real Christmas trees there are tradeoffs. And how we view those tradeoffs depends on who we are. 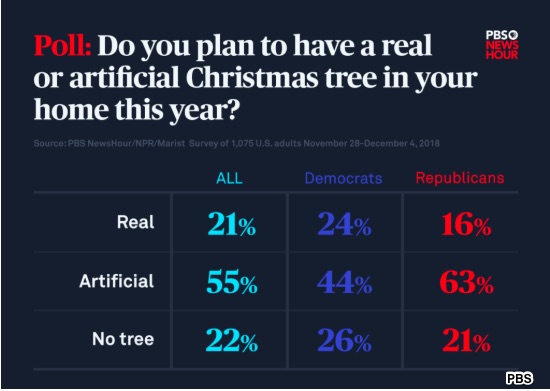 My sources and more: Thanks to my student Lizzy for the fake Christmas tree idea which led us at first to Quartz. At this point, the articles multiplied. The WSJ Numbers lady had more about Christmas tree sales and recycling. The NY Times had the environmentalist perspective and PBS, the politics. In a podcast Prime(d) spoke about Amazon.

From the NY Times, our featured image is Mountain Top Fraser Fir, a Christmas tree farm in Newland N.C.