What Santa accomplishes is amazing.

During approximately 25 hours he covers 50 million square kilometers at nearly 10,000 kilometers per hour to visit perhaps 160 million children. That speed could create massive aerodynamic heating and, with 20 tons of presents, he needs super strong reindeer. But he figured it all out.

Our question today is how much Santa would get paid for driving that sleigh and all else that he does year round.

We can calculate Santa’s annual income because he isn’t the only one who checks everything twice, wraps toys, and drives a sleigh. Since accounting clerks, professional shoppers and pilots do (sort of ) what Santa does, we can look at what they earn. Yes, their “parallel” occupations are not entirely comparable. 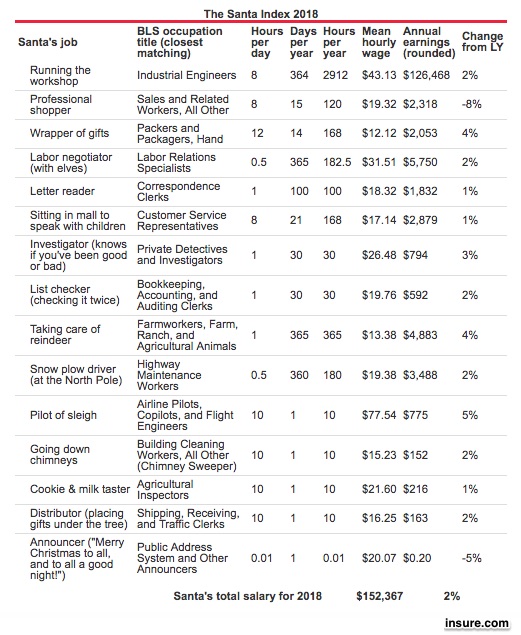 To find wage gains, it all depends where you look.

For one in seven workers, there are none and no one is sure why. According to the Washington Post, the usual pattern is a pop in wages after a recession. However, some bosses might hesitate because they still remember the recession. With fewer unions, others have little pressure to increase worker pay. And a third group could feel that 2.5% inflation is a “do-nothing” signal.

Most workers though did have an average increase in earnings that was close to 3% according to this month’s employment report. As for the annual change in weekly earnings, they went up from $915.53 in November 2017 to $940.84 last month.

You can see below that pay boosts for workers in five out of ten industries were close to the inflation rate: 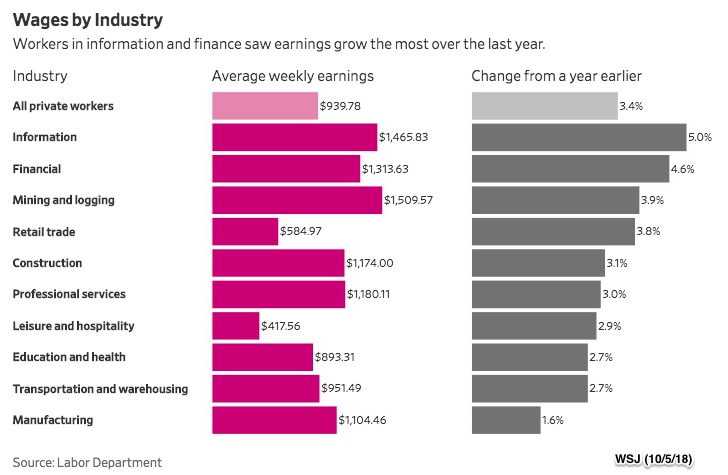 Our conclusion? Like many U.S. workers, Santa can say that his earnings are not rising fast enough.

My sources and more: For an excellent analysis of Santa’s deliveries, this BBC More or Less podcast was perfect as was this insure.com estimate of Santa’s salary. However, if you want more confirmable data on wages, do go to the BLS and the Washington Post and

Please note that the spirit and some of the text of this post resemble a similar econlife from several years ago.

The New Meaning of Fast Delivery