How Uber Should Apologize for a Delay

When Uber’s Chief  Economist arrived late for a panel discussion because of an Uber driver’s mistake, he never received an apology. But unlike most of us, he was able to call Uber’s CEO and do something about it.

How Uber Should Apologize

Uber’s Chief Economist John List wondered how businesses should apologize. He knew that substantial revenue was at stake because unhappy riders spent 5% to 10% less. So, with three other economists, he collected data on late rides from 1.5 million people–a rather hefty proportion of Uber’s 15 million daily rides.

(I did simplify somewhat but this was the basic design.)

And no, as in the #3 apology, they did not say they were “idiots.” However, they did say the lateness was their fault: 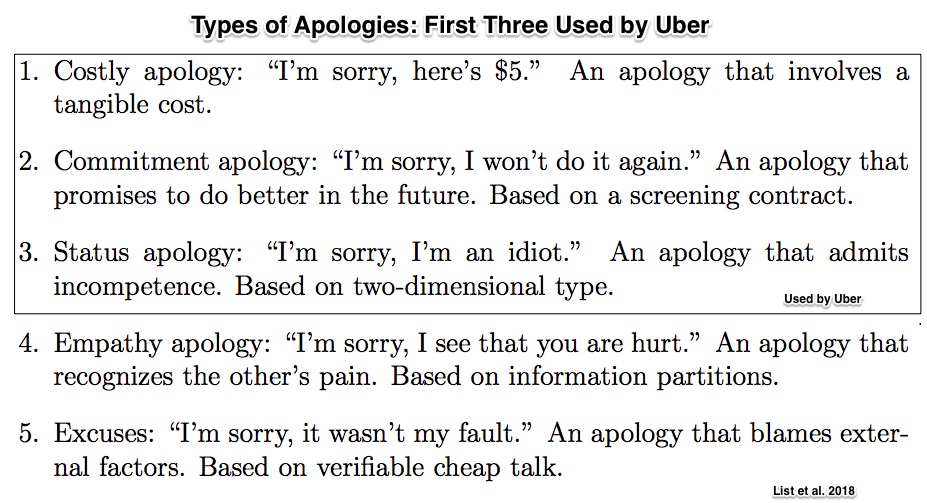 The $5 coupon mattered most while the type of apology or even if one were offered did not really count. In fact, when there was a second late ride, the apology backfired.  People were more disturbed than if they had been told nothing.

After 84 days, the riders with delays generated more future revenue when given the $5 coupon: 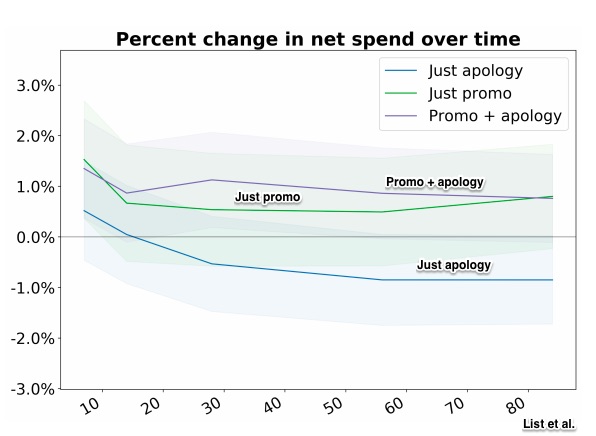 In many ways, a successful apology recreates the trust that had been lost because of someone’s misbehavior. Yet to be successful, that apology requires a sacrifice–a cost.  The cost can be tangible like a coupon or flowers. Or, it could be intangible as when people demean themselves.

For Uber though, we can paraphrase a line from the 1970 film, Love Story and say that a 15-minute delayed arrival means “…never having to say you’re sorry.” It just requires a $5 coupon.

My sources and more: To learn more about the economics of apologies (and some hints for your own life), a brief discussion is at the Planet Money Indicator podcast while  Freakonomics took a longer look. Then, for the academic perspective this Stanford paper and this one from Uber were actually rather interesting.

An Inside Look at the iPhone

Six Facts: What Our Pet Spending Says About Us