Still More on the Mommy Penalty

Recently, we’ve had lots to say about the mommy penalty. Now there is still more.

In a recent paper on attorneys’ gender pay gap , researchers focused on easily measured metrics. Isolating annual hours billed and revenue generated from new clients, they found that women tended to underperform their male counterparts. The men billed an annual average of 1826 hours, the females, 1677. As for new client revenue, the men bring in twice as much.

This is the pay gap: 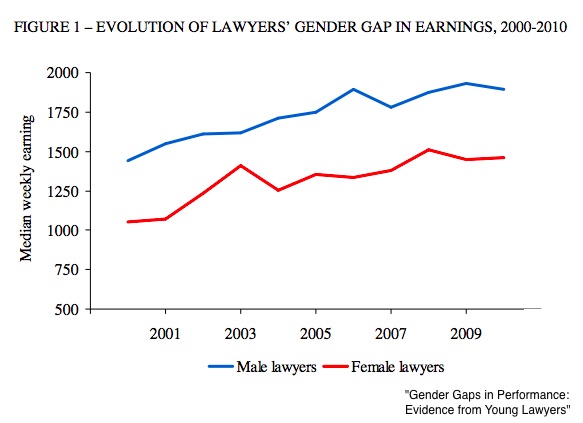 While the data in the graph did not distinguish between the women who did and did not have children, the paper’s authors concluded that the presence of pre-school age children diminished the women’s performance.

In another paper, using data from Denmark, an economist from the University of Chicago looked at a vast spectrum of wages, jobs, and industries. But her approach to the gender pay gap was unique. Instead of wages, she looked at the revenue that productivity would generate. Then, with her productivity data, she compared male and female parents and male and female non-parents.

Her goal? To see if productivity correlated to the wage gap.

As you might expect, she found that women with young children were less productive than comparable men. Young moms did generate less money for their employers. The reasons could be less flexible hours, less voluntary overtime, or less effort. Whatever the cause, the outcome was the same: less productivity.

Here though we have the unexpected. Even though women without children were more productive than their male counterparts, they also earned less. Asked about discrimination we could say the most egregious is toward these non-mothers. The reason? Probably an employer’s expectations.

Finally, we have the equally unsettling confirmation that the average dad earns more: 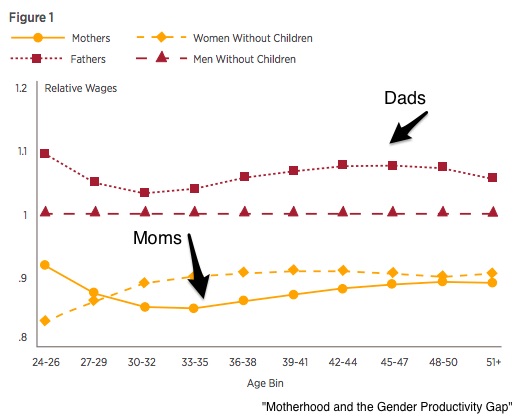 A behavioral economist might say that an expectations bias contributes to the gender pay gap. Shown by the following experiment, what we expect can determine what we believe.

During a 1960s lab experiment, Harvard professor Robert Rosenthal falsely labeled average rodents as either smart or dumb. Because his students seemed to have an affinity for the rats they assumed were smart, they handled them more frequently and more gently. Since touch affects a rat’s behavior, the “smart” ones not only outperformed the “dumb” ones but also were tamer, cleaner, more pleasant and more likable. Dr. Rosenthal concluded that his students had demonstrated an expectations bias that affected their subsequent attitude.

Similarly, I wonder if an expectations bias influences what some employers pay young women and dads. For the women, they could expect they will have children. Because those young children make their moms less productive, all young women tend to get paid less. Meanwhile, do we still have the expectation that the dad needs to earn more?

My sources and more: Thanks to WSJ for alerting me to this new paper and its summary on the mommy penalty. However, if you want more detail, in addition to econlife, this recent paper on the gender pay gap in the legal profession was quite readable.

The Travels of Mobile Money