Rents in the U.S. have steadily been rising. Somewhat less than previous years, the 2017 median increase was 3.1%.

These areas had the biggest jump: 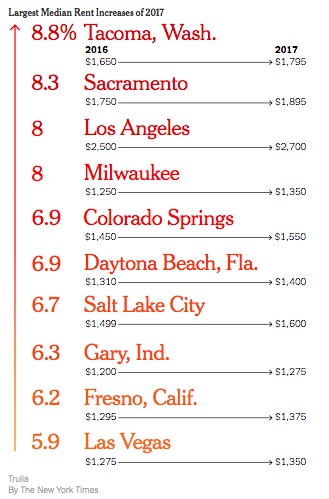 Responding, lawmakers have said rent control is the answer. According to new study, maybe not.

San Francisco’s first rent control law was passed in 1979. It had a 7% cap for rent increases in buildings completed before June 13, 1979. The exception was the “mom and pop” structure. Owner occupied, it had no more than four units.

Our focus though is a 1994 law. When a new regulation said the 1980 exempt units were now rent controlled, researchers from Stanford realized they had an ideal split. They could compare the 1900-1979 rent controlled group to the 1980-1990 group without it.

Landlords responded predictably. In high income  neighborhoods, their rent controlled buildings became condos. Building owners also moved into apartments and offered tenants a fee to vacate. Furthermore, landlords did invest in their buildings because they could pass the expense along to their tenants.

On the tenant side, the reaction was also what we would expect. Older tenants tended to remain while younger households had more reason to move. There was more rent control in less affluent areas. And yes, tenants enjoyed a dollar benefit that ranged from $3100 to $5900 a year.

The impact of the 1994 law was fewer rental units and a citywide rent hike. San Francisco wound up with gentrification–precisely what rent control is supposed to prevent.

Rent control prevents the housing market from functioning freely. Instead of supply and demand, a government agency prescribes a maximum rent. Tenants who have access to rent control enjoy its benefits. Advocates claim that middle and lower income households can remain in areas that otherwise would be prohibitively expensive. On the supply side landlords have expressed dissatisfaction.

You can see though that in San Francisco, the landlords were not necessarily unhappy. While initially they experienced a wealth transfer to their rent controlled tenants, it was only temporary. In the future, they were enjoying the sale of units at market prices and higher rents because they had the incentive to limit the supply of rental units.

An economist would use a ceiling (brown line, below) to illustrate that rent control creates a shortage. For San Francisco, we also could draw a second supply curve to show a future with fewer rental units: 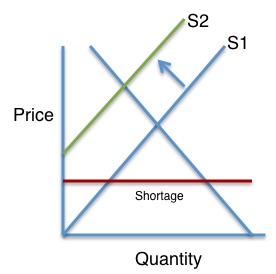 At this point we can return to where we began and answer if rent control really controls rent. It depends.

My sources and more: A recent WSJ article and FT Alphaville reminded me that rent control has become a headline again. One reason is this new NBER paper.that was rather interesting (in a dry way) and this NY Times overview of rising rents.

Our featured image was from Wikimedia Commons.