Will Money Bring You Happiness?

When researchers look at the connection between money and happiness, they don’t call it happiness. Instead, their surveys focus on life evaluation and emotional well-being. For the big picture, they look at life evaluation. Then, including joy, sadness, and stress, the emotional half takes them to how individuals currently feel.

One of the newest studies is based on a World Gallup Poll taken by more than one million people from 2005-2016. Touching many topics, the survey included questions that related to life evaluation and emotional well being. It enabled the researchers to extract data about multiple sample groups of 1000 to 2000 people in different countries.

When pondering this study, the word to remember is satiation. The researchers concluded that we all reach a satiation point beyond which more money makes little difference. How much? It depends.

This graph from Quartz is based on life satisfaction income thresholds. You can see that the satiation point correlates with where you live and your gender: 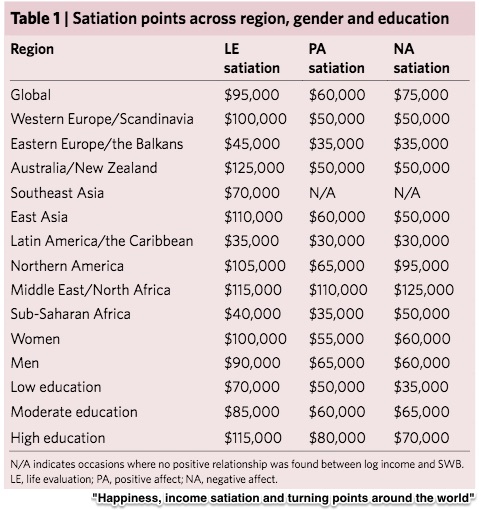 Also based on Gallup data but just for the U.S., a 2010 paper from two Nobel laureates conveyed slightly different conclusions. They do agree that there is a ceiling beyond which money will not bring us more emotional well-being. However, they hypothesize that our life satisfaction continues to rise as we earn more: 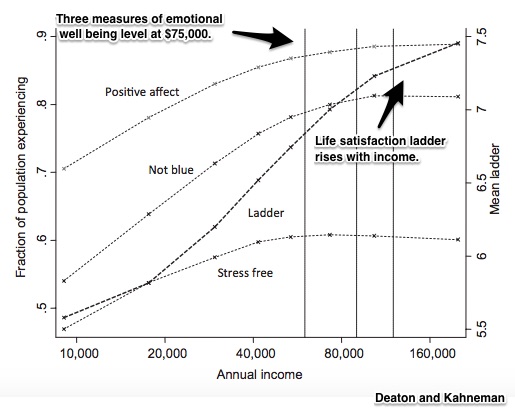 So where does all of this leave us? All of the data point to some correlation between money and happiness. From there though, it is so much more complicated.

My sources and more: For up-to-date happiness studies, my first stop was Quartz and this academic paper. Then I went to s Gallup press release on their poll and Deaton and Kahneman. However, since we still don’t know precisely how, if and when money brings happiness, maybe we just need to look at Yale’s new class, “Psychology and the Good Life,” aka their Happiness course.