Through its partnership with UberEats, McDonald’s is able to get a bag of French fries to your home in 30 minutes.

However, a reporter from Eater says they were lukewarm and only half were crunchy. Whereas McDonald’s told Bloomberg that customer satisfaction was high, I suspect they have a bag problem. During the trip to our homes, those hot fries are getting steamed.

This isn’t the first time that McDonald’s has had soggy fries.

When McDonald’s started to expand during the 1950s, some French fries were perfect while others were not. Suppliers were providing the same russet potatoes. They used precisely the same soaking and cooking techniques. But still, some had no crunch.

Millions of dollars and hundreds of hours later, McDonald’s figured out a solution. First, their potatoes had to be stored for three weeks so that enough sugars could turn to starches. Next, they made sure that every restaurant used identical raw fries. Finally though, it turned out that the French fries cooked perfectly whenever the oil temperature rose no more than three degrees above its lowest point. With an electrical sensor maintaining the three-degree difference, they were able to make what we now know are McDonald’s fries.

You never know when the technology that solves a delivery problem will have a much bigger impact. For pizza it was the little white plastic table. Stopping the roof of the box from collapsing on your pizza, it cheaply and cleverly prevented a disaster.

This is the 1983 patent request from Carmela Vitale for her pizza “package saver.” 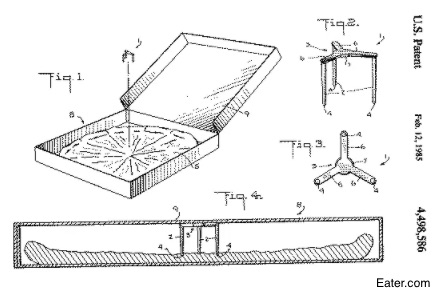 When University of Pennsylvania economist Edwin Mansfield (1930-1997) described the big impact of a small innovation, he was referring to industrial thread. But the pizza package saver could also have had a private and social return. We just need to look at the private return that goes to inventors and manufacturers, and a social return that ripples far beyond when the invention stimulates more innovation.

My sources and more: Occasionally seeing a story’s twist, Bloomberg pointed out the impact of new technology on McDonald’s labor force and its take-out customers. But if you read just one article, do enjoy Eater’s look at McDonald’s take-out fries and the pizza “package saver.”

Please note that parts of today’s econlife were in one of our previous posts.

Why It's Tough for OPEC to Fight the Frackers