The Mystery of France’s Disappearing Butter

Recent headlines have said that France is suffering from a “Pastry Panic” and “Milk Fat Mayhem.” They also tell us that “Croissants are in Crisis” as “French Bakers Crumble.”

Really though, the problem is a butter shortage.

Why is Butter Disappearing?

During the middle of October, nearly one-third to one-half of France’s demand for butter might not have been satisfied. The reasons range from hoarding to less productive cows. They also include EU regulatory policies that tried to elevate unusually low prices by cutting supply and more baking in the U.K. In addition, the dairy industry has sent less butter to French supermarkets because world markets would pay them much more.

Finally and crucially, butter is back. Realizing that it might not be bad for us, we are all eating more. You can see below that butter consumption is way up in the U.S.: 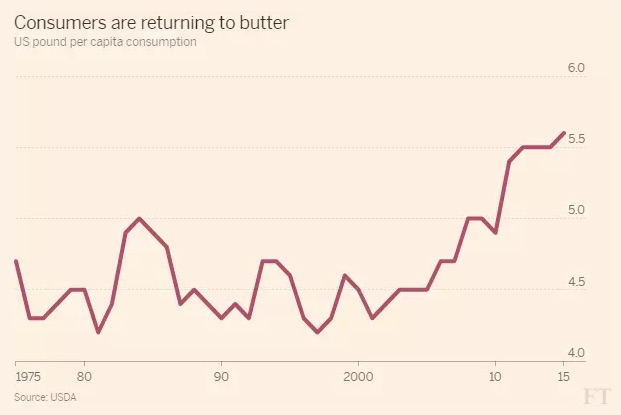 At the same time, butter has become more popular in wealthier developing nations:

And as for France, butter has always been a basic. Their croissants have always been 25% butter.

The price of butter has soared. Moving from 2500 to 7000 euros a ton between the spring of 2016 and the summer of 2017, butter suddenly became very expensive: 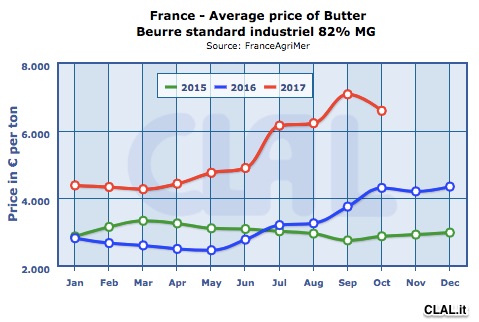 As economists, we can easily explain the increase. Below, changing from blue to green, the downward sloping demand curve shifts to the right. At the same time, the new green supply curve moved to the left of the old one.

You can see there is only one result. Less supply, more demand, and butter prices soar: 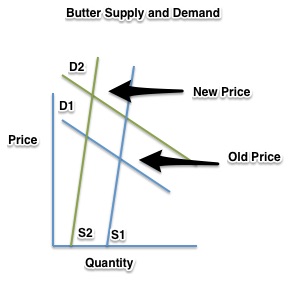 The reason? A butter meltdown.

My sources and more: Adding to what the NY Times said yesterday, I also recommend Quartz, Eater and Bloomberg. Meanwhile FT had more of the financial side that these stats complemented.

There's No Such Thing As A Free Reward