How Our Tipping Behavior is Changing

When we last looked at tipping, we said that it was a way to impress people (like Seinfeld’s George, below). Also we might be expressing altruism or just saying thank you for good service.

But beyond all of the basics, our tipping behavior reflects a social norm that says how much we should leave certain individuals.

Now, with the digital economy there is more.

According to bon appétit, the scoopers at Molly Moon’s Ice Cream in Seattle have begun making $12 an hour in tips rather than $8.  Similarly, an owner of a San Francisco Deli said tips now totaled from 7% to 16% of daily sales, The range used to be 5% to 10%.

The reason appears to be digital tipping.

But why? We could say that when we pay online, we no longer feel the pain of less cash. But credit and debit cards also minimize the pain so there must be more causing the current boost in tips. One payment app co-founder adds that digital payments are faster and easier. He theorizes that the longer people wait for a check, the less they tip.

The most convincing explanation though is the “nudge.” Those amounts that a tipping app suggests are what we are most likely to select. For Square, a Smart Tips feature says no tips, and then three percentages with 15% the lowest and 25% the highest. I suspect placing 15% as the bottom makes it appear the frugal choice.

You can see below that Starbucks gives us four alternatives: 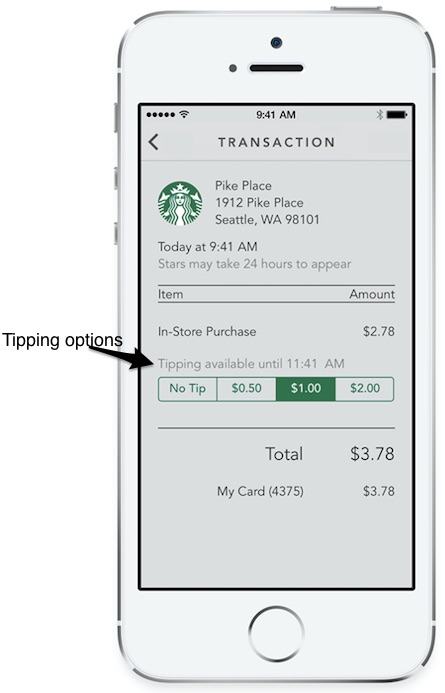 Explaining our digital tipping we can start with anchors and end with social norms.

An anchor creates information on which we can base a decision–precisely what the Starbucks app does. It establishes a tipping range. Many of us will then believe that our tip should be between $,50 and $2.00. Similarly in restaurants, digital anchors have been persuading us that 15% is insufficiently generous.

I suspect that all of this is nudging us toward a higher social norm for tipping.

Our sources and more: A recent econtalk on tipping made one of my walks more pleasant and was the perfect complement to the March 2016 bon appétit blog.