Residents of Nairobi’s largest slum take home 50 cents worth of charcoal in old plastic bags. Because they can afford no more than small quantities, they need plastic bags to transport a cup of cooking oil, some laundry detergent and even a squeeze of toothpaste.

Since August 28th though, it has been illegal to use, manufacture, and import single-use plastic bags in Kenya. Scofflaws could be fined $19,000 to $38,000 or spend up to four years in jail. Retailers cannot sell plastic garbage bags while consumers cannot use them.

Where are we going? To how an economist would have defended a bag tax.

Like cities and countries around the world, Kenya is trying to eliminate its plastic bags. Statisticians have estimated that Kenyans use close to 24 million bags a month. (I always wonder about these estimates.) This is Kenya’s third attempt. They previously tried and failed in 2007 and 2011.

Some say the poor–many who live on less than $1 a day–will suffer without the bags for their daily shopping. Garbage collectors predict a dirtier city because they need plastic bag liners for pails. Meanwhile, Kenya has 30 plastic bag factories, a plastics industry, and 60,000 vulnerable workers. And, it is even possible that paper bag replacements could have a bigger carbon footprint than plastic.

Others respond that plastic bags do irreparable environmental harm. Taking centuries to degrade, they clog streams and sewage systems. They harm the animals that ingest them. And used for human waste among Kenya’s poor, they diminish everyone’s dignity and spread disease.

Including fees, taxes, bans and use limits, plastic bag regulations vary. England’s 5 pence charge is said to have reduced usage by 85%. In Rwanda, walking down the street with a plastic bag could get you a $150 fine. But the downside is their plastic bag black market.

As the newest additions to a list of plastic bag regulators, NYC and California are not nearly alone. In the U.S., close to 150 cities and counties regulate plastic bags. For the world, although this map is three years old, you can get a general idea of the regulatory spread: 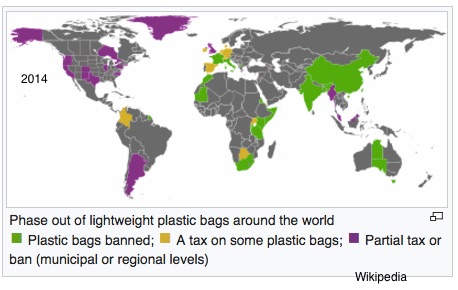 First described by British economist Arthur Pigou, a tax levied on a good or service that creates a negative externality has a dual benefit. It diminishes how much we use the item that harms us while raising revenue that a community can use productively.

So, whenever someone mentions a bag tax, you might call it “Pigovian.”

My sources and more: While the most recent plastic bag story is Kenya’s, others are everywhere. The LA Times discussed the California ban while the NY Times looked at Kenya as did the Economist. More specifically, this Kenyan newspaper looked at the garbage collectors’ protest. But Quartz had the best analysis and NPR, the best examples of the bans’ impact. Finally, if you just want a good read, go to the New Yorker. I should note that Wikipedia appeared to have accurate facts that updated its map (above).

The Pigovian tax paragraph was previously published in an econlife post.

The Money That People Won't Spend