In Saudi Arabia a woman’s son can become her guardian.

Where are we going? To why the Saudi economy could produce so much more.

Saudi Arabia’s guardian system mandates that men decide what women can and cannot do. Imagine, to get a job, to pick up groceries, to deposit money in the bank, you need a man’s permission. That man could at first be your father and then your husband. Without a husband, you could have a brother become your guardian or even a son if he is old enough.

Once you have your guardian’s permission to go somewhere, a male driver has to get you there. But having a man available 24/7 is expensive. So, lower wage non-Saudis do a lot of the driving. They accompany and oversee women whom they don’t necessarily know.

Manal al-Sharif was the Saudi woman whose driving video went viral in 2011. Before, as an Aramco employee, she had lived and driven in New Hampshire and on the Saudi Aramco campus where the restrictions don’t apply. However, beyond those borders, she was stranded unless a man was there.

In her new book, Daring to Drive, al-Sharif details her life as a devout fundamentalist and then a women’s rights activist. For us though, her story is also about an economy that underproduces because of discrimination.

According to the World Bank, only 25.2% of MENA (Middle East, North Africa) women are employed. The reason? Discrimination creates multiple transaction costs, depressed salaries, early retirement, and scarce entrepreneurial capital. The result? Especially in countries like Saudi Arabia and Qatar where female literacy rates are high, we wind up with a severely compromised GDP. Quantified, the total could be $1 trillion in sacrificed cumulative output. 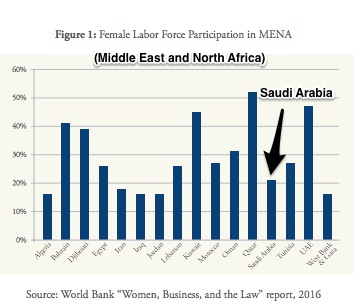 Taking the next step with a production possibilities frontier, we can illustrate underutilization. Whereas our curved line shows an economy’s maximum production potential, the dot indicates underutilization. For Saudi Arabia, that dot is there because female labor participation rates are way below where they could be:

We can return now to where we began. Saudi Arabia’s guardian system diminishes what women could add to the Saudi GDP.

A Postscript: Reuters today reported that Saudi public schools will start offering physical education for girls during the coming academic year. Considered “immodest” and “Western,” women’s athletics had been prohibited. Also for the first time, women’s gyms can be legally licensed.

My sources and more: During yesterday’s five mile walk, I listened to an al-Sharif interview on NPR’s Fresh Air. Recalling that several years ago we had posted her viral driving video, I realized it was time for this update. More so, I recommend the al-Sharif book and this NY Times Op-Ed.

What Most of Us Don't Know About the G20

A New Way To Take Our Economic Pulse