The Significance of a Baby’s Name

Michael was the most popular baby name from 1954 to 1998 except for 1960 when David nudged it into second place. This year’s list from the Social Security Administration (SSA) is based on almost 4 million applications for Social Security cards.

And still Michael is in the top ten: 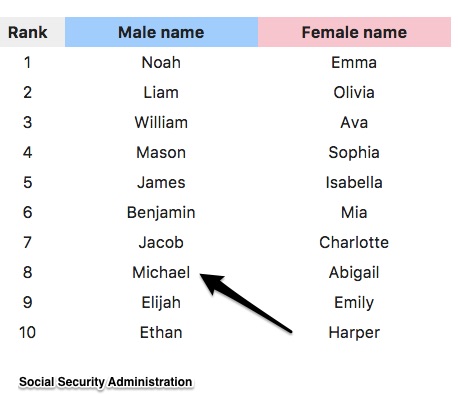 The Message From a Name

As an actuary at the SSA during the 1990s, Michael Shackleford wanted a less common name for his newborn. His check of some Social Security applications became an annual event involving all of them.

Uniqueness could be one of many messages conveyed by a name. Looking at names data from California, three University Chicago researchers concluded that baby names can reflect a parent’s political bias.

Parents who are more liberal tend to demonstrate their cultural superiority with uncommon names that have obscure significance. For example, they might name their children Franny and Zooey because of J.D. Salinger. They also will select names with a more “feminine feel” and softer sounding letters.

However, when conservative parents send their “economic signal,” they use more masculine sounding traditional names with harder consonants and/or fewer syllables. We might have the perfect example from Republican VP candidate Sarah Palin (2008). She named two of her daughters Bristol and Piper and her two sons, Trig, and Track.

By contrast, think of the Obama girls: Sasha and Malia.

Called the fallacy of composition, sometimes what works for an individual is bad for the group. When there is a fire in a theater, one person can run successfully for the exit but not everyone. If one farmer has a bumper crop, she can take advantage of high prices. However, when everyone harvests more, the supply curve shifts to the right and price plunges.

With names, the phenomenon might be similar. When everyone selects the same unique name…is it really so special?

My sources and more: Thanks to WSJ for alerting me to Michael’s popularity and the SSA list. For an academic perspective, I recommend the University pf Chicago study. But best of all is the Freakonomics podcast, “How Much Does Your Name Matter?” Please note that we quoted our discussion of the University of Chicago names study from a previous econlife.

How Holiday Spending Helps (and Harms) Our Economy