How Holiday Spending Helps (and Harms) Our Economy

But during all of May you can enjoy National Chocolate Custard Month. From May 26-28th, it’s National Polka Weekend, and May 21-27, National Dog Bite Prevention Week.

Probably the only people who really appreciate the unbelievably long list of commemorative days and weeks and months are the advertising execs who encourage us to observe them. If reminded, maybe we will eat more chocolate custard or take some Polka lessons (???) on May 21.

Mother’s Day is at the high end of the special day spending scale.  Yes, shoppers will buy more greeting cards ($2.5 billion). But they spend the most on jewelry ($5 billion).

The National Retail Federation used survey results from 7406 consumers for their data: 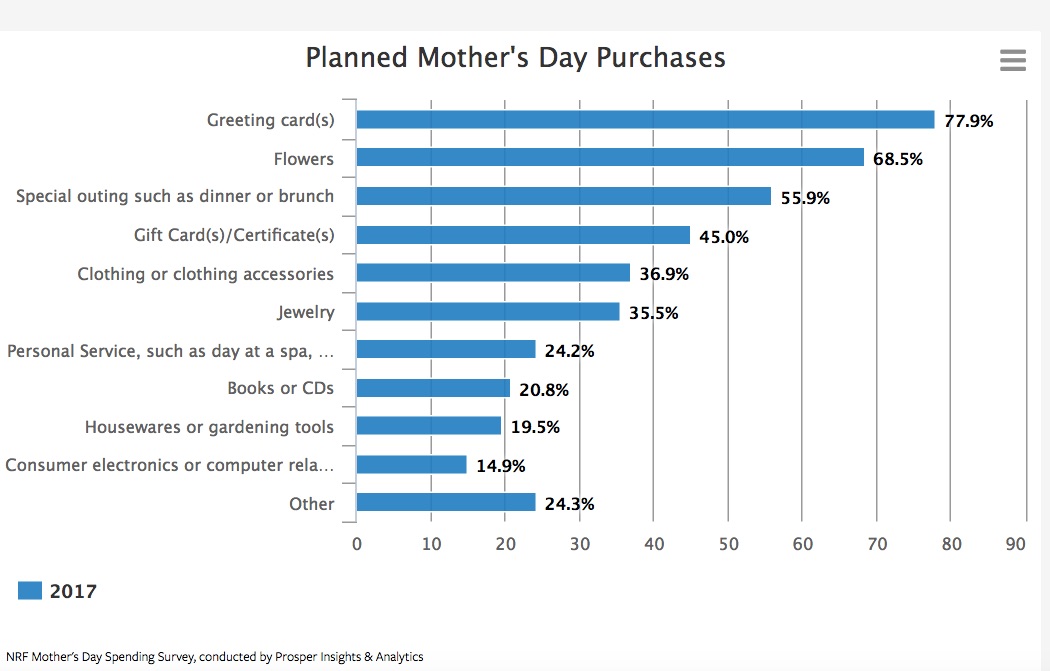 But the St. Louis Fed warns us that consumer spending has a downside. Looking back to 1961-1970, the consumer proportion of GDP was 61.8%. Since then it has steadily grown to 70% while the investment segment of the GDP dropped from 20.5% to 18.6%. Worried that the consumer could crowd out investment–a crucial source of economic growth–the St. Louis Fed asks us to “include a larger role for business investment and exports.”

Perhaps then, National Garlic Day might not be so good for the economy?

My sources and more: Thanks to Planet Money for alerting me to the “create-a-holiday” business and its benefits. But if you want to see the actual list of minor holiday observances, do look here. As for Mother’s Day spending, the National Retail Federation is a handy source for the facts. Most of all though, if you want the economic analysis, this St. Louis Fed paper has it.

The Significance of a Baby's Name

The Rise and Fall of Standardized Dress Sizes in the U.S.