The Response to Calorie Labels

Now that we know a Starbucks Double Chocolaty Chip Frappucino Blended Creme has 540 calories, do we care?

Domino’s does. Expressing resistance to a calorie label mandate, Domino’s tell us that their custom pizzas have 34 million possible calorie counts while Pizza Hut claims 2 billion. (Is that possible???) 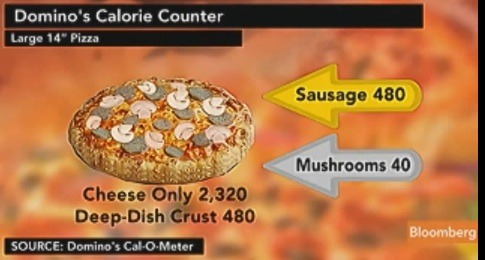 Where are we going? To the impact of calorie labels.

On December 1, 2016 the calorie label mandate of the Affordable Care Act will become the law of the land. Applying to chains with 20 or more locations that have a similar menu, the rule requires calorie and nutrition information.

However there is a problem.

Recent research indicates that calorie labels don’t diminish calorie consumption among fast food patrons in low income high minority neighborhoods. The conclusion came from an NYU study of four fast food chains that first posted calories in NYC in 2008. Their goal was to compare the customer response when the information was initially available to four other data points during 2013 and 2014. Their control was a similar cohort in Newark NJ and later in Jersey City where there was no labeling. The results? Caloric intake did not drop and over time, fewer people noticed the labels.

Meanwhile, as Domino’s tells us, on the supply side the labels require an allocation of resources that firms might use elsewhere more productively.

While the calorie label “nudge” from government might not diminish obesity, a second approach displayed some possibilities. It involved a small regional chain changing its children’s menu. Instead of offering French fries, a salad or fruit was the default side dish. Here the result was healthier. People ordered fewer fries and soda and more of the default menu. As you would expect, the healthy eaters consumed fewer calories.

Behavioral economists believe that cost, defined as sacrifice, shapes our behavior. With calorie labels, we are comparing the long term cost of obesity and heart disease to the short term benefit of a Starbucks venti Double Chocolaty Chip Frappucino Blended Creme. Unaware that we are doing cost and benefit analysis, many of us prefer to increase short term pleasure instead of decreasing long term cost.

Behavioral economists also tell us that the default option is what we are more likely to select. Harvard law professor Cass Sunstein explained that we gravitate to defaults because they simplify our lives. In his book Nudge, he adds that many people believe the default must be beneficial because it is the default. Furthermore, people get decision fatigue and select the “yeah, whatever” choice because the default is almost like “doing nothing.”

How Aging Populations Affect What We Make and Sell

A Brief Primer for the Paris Climate Talks