Part 1: The Trap That China Wants to Avoid

Because of the “hills, plateaus, mountains and plains” of economic growth, a developing nation might never make it beyond middle income. While some do like the Republic of Korea, others such as Brazil are stagnating.

Where are we going? To deciding whether China has a middle income trap problem.

What is Middle Income?

To be classified as middle income, the World Bank says your minimum per capita GNI (Gross National Income) has to be $1,026. Because the other end of the range is $12,475, the “club” includes 88 countries. Probably feeling they had too large and diverse a crowd, the Bank then used per capita income numbers to divide those 88 nations into a low and high middle income group:

Who is Middle Income?

Asking which countries we are talking about, we can look below. Using per capita GDP as our yardstick, we can see that China, Argentina, Brazil, Mexico, South Africa and Turkey are currently middle income countries. All except China have been MI countries for decades.

Meanwhile, exceeding a per capita income of $12,475, Taiwan, the Republic of Korea, Hong Kong, Japan and Singapore have moved to the high income bracket.. 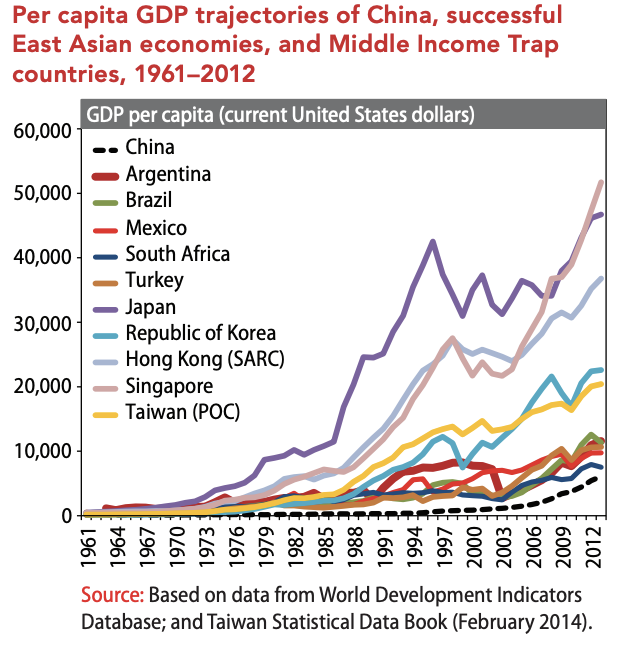 From: “Will Inequality Lead China to the Middle Income Trap“

China’s per capita income of $5,445 in 2011 places it at the lower end of the top half of the middle income group. The question we can ask is if it will remain there.

Asking where China might go from here, do return tomorrow. We’ve got some interesting ideas.

(We also should ask if China’s growth statistics are accurate but we will save that for another day also.)

Part 2: How the Middle Income Trap Could Catch China