When to Worry About Sovereign Debt

Assume that someone has a $10 million mortgage. Then you learn that the net worth of the individual is one of the following:

Net worth can determine how you perceive a loan. The smaller the debt to net worth ratio, the more conservative the financial behavior. Similarly we can look at debt to GDP ratios to judge whether countries and other municipalities have borrowed beyond their means.

Where are we going? To deciding when a debt is too large.

As a U.S. commonwealth, the Puerto Rican debt to GDP ratio of 70% can be compared to U.S. states.

Meanwhile, at 174%, Greece’s debt to GDP ratio is even more problematic. 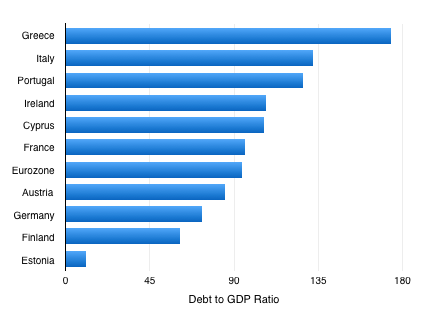 When deciding how much sovereign debt is too much, we should look at debt to GDP ratios. That however is only the beginning. Next we need to ask if the country is developed or developing. Predictably, a developed nation can accommodate a higher ratio. Rather astoundingly though, at 237%, Japan’s debt to GDP ratio is gargantuan and yet our concern for Puerto Rico, at 70% is far greater. Then, we can also check to see if the country has a history of defaulting (like Greece) and whether its political institutions are strong enough to endure austerity.

Why Children Are More Expensive Than We Think

Why Government Needs to Catch Up With Uber