Whole Foods tells us that they have 2600 organic and natural food products. For shoppers though, knowing the product is only the beginning. From there we have decisions about whether or not to buy organic, which nutrients, how much sodium. Today it took me more than five minutes to select a multigrain cereal.

Surely knowing that too much choice wears us out, Whole Foods recently made shopping easier with a rating system for produce.

Where are we going? To choice fatigue.

Called Responsibly Grown, the Whole Foods rating system assesses a long list of variables that are more complex than they first appear. Vastly simplified for shoppers, the system tells us what is good, better and best.

This is their description: 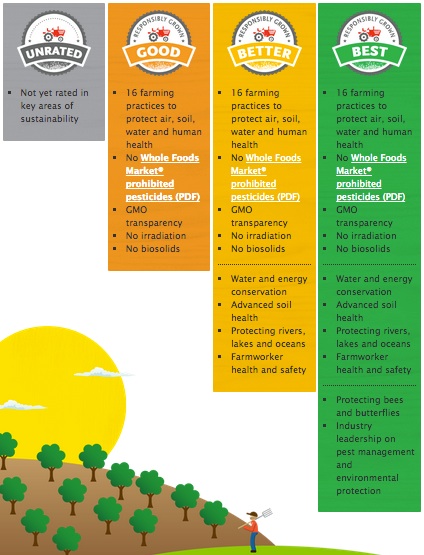 You can see how Whole Foods is streamlining what we need to consider. When we have to decide between asparagus and artichokes for dinner, we need think of nothing else except good, better or best.

Marketing scholars, behavioral economists and psychologists have concluded that too much choice can impact our subsequent behavior. Called choice fatigue, getting tired out from too many shopping decisions can mean that we buy less or select an easier alternative.

In one study, shoppers at an upscale supermarket had the opportunity to sample six different jars of jam during a five-hour period. Offered a much bigger selection during another five hours, a second group had 24 flavors from which they could choose.

Again observing the impact of choice, another group of researchers looked at our car buying behavior. When consumers were asked to choose among “4 styles of gearshift knobs, 13 kinds of wheel rims, 25 configurations of the engine and gearbox and a palette of 56 colors for the interior,” they got too worn out and turned to the (more expensive) default option.

And finally, President Obama told writer Michael Lewis that he wears only gray or blue suits. Minimizing wardrobe and menu decisions lets him preserve his energy for the important stuff.

Several weeks ago, when we looked at the McDonald’s menu, we said that too many decisions can be exhausting. The same bottom line applies to Whole Foods. Since the Whole Foods rating system minimizes our thinking, we can avoid choice fatigue and energetically continue shopping.

We will save for another day the connection between choice fatigue and financial decision making.

The Cost of the Squeegee Men

Where to Spend 100 Trillion (Zimbabwe) Dollars