Successful women and men who marry could be making income inequality worse.

Where are we going? To marital sorting.

Nobel Laureate Gary Becker (1930-2014) first told us that men and women selected each other in marriage markets. Like all other markets, we had supply and demand. The men and women who were “bidding” for each other had a value based on what they could contribute to their lives together.

Whereas women had originally been Becker’s “domestic specialists,” their role changed during the 1970s. It was all about the pill. Once they could “time” their children, more women entered professions that required more education, more time and paid higher wages.

Consequently, a new cohort of females became a different kind of wife. In those households, both partners were earning income.

And that takes us to marital sorting.

First we can ask if the educational resemblance of spouses has increased. You can see below that until 1960 or so, assortative mating declined. Since then, it has steadily risen.

But, does that education matter? The St. Louis Fed provided one answer in this graph: 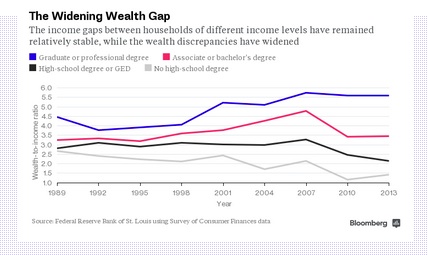 Another answer was given by researchers who compared income distribution when “like married like” to a counterfactual random set of pairing statistics. The result? To quote the study, “…if people matched in 2005 according to the standardized mating pattern observed in 1960, which showed less positive assortative matching, then income inequality would drop…”

So, we have a segment of the U.S. population in which women and men with more education have formed households. That cohort provides another lens through which we can better understand income inequality.

Behavioral economist Gary Becker told us that our quest for a mate is really about markets. However, rather than looking at just one marriage market, we can instead perceive several. Because of markets where educational levels are similar, we have assortative mating in which like marries like and income inequality is exacerbated.

Perhaps providing some marriage market clues, these graphs are interesting:

Success and Your Name

The Data Leaks That Move Markets