Three Big Questions About the GDP

Two weeks ago, looking at World Bank growth rates for China and India, you would have seen that India is behind:

Last Monday, India’s statisticians changed the way they calculate the GDP. Selecting a new base year, revising how they weight certain industries, and counting final prices rather than production costs, they elevated their numbers. 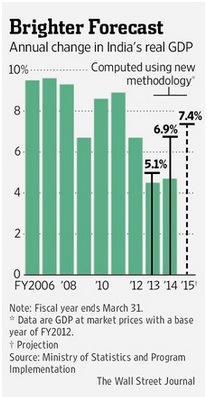 As a result, at 7.5 percent and 8.2 percent for the second and third quarters, India’s revised numbers exceed a 7.3 percent Chinese growth rate.

But, it is not quite that simple. India’s fiscal year is April 1 to March 31 and China’s is the calendar year. So, when we compare GDP growth rates for 2013 or 2014, we are not even looking at the same months.

Where are we going? To how a GDP number is misleading.

When we look at GDP numbers, they seem rather precise. We can get a total for the value of goods and services produced to get the GDP for a single year and then compare two years for a growth rate.

Statistics, though, are rarely that simple.

What Italy did in 1987 is one example of many that would display a counting problem. In 1987, Italy pushed its GDP up 18 percent and became the fifth largest economy in the world by including “off-the-books” transactions. And now, if we fast forward to 2015, Italy’s GDP will include illegal drugs and prostitution. But other countries like the U.S. exclude the “informal” economy (although medical and recreational marijuana are starting to creep into the data because they are legal in certain states).

So, when we compare different GDPs, we are not comparing “apples to apples.”

And, it gets worse…

2. What actually gets counted?

In his book Poor Numbers, economist Morten Jerven used a 2007 example from Zambia to show why African GDP numbers are problematic. Visiting the Zambian Central Statistical Office in Lusaka, he learned that their staff was composed of three people. The one person in the office pulled together cement purchases to estimate national construction. The value of agricultural production was based on crop forecasts for 8 crops. Growth for retail, wholesale and transport were taken from prior growth rates. The result, though, was one precise number, a GDP number.

3. What should we count?

Finally, a huge debate is unfolding about whether any GDP number can be accurate. Because it ignores positive and negative externalities that include happiness, education and resource depletion, and free services like Facebook and Twitter, the GDP data base has been challenged.

When Nobel Laureate Simon Kuznets developed the concept of the GDP during the 1930s, he had to decide which goods and services would count. Concluding that the GDP had to measure the wealth of the country, he said to add together the prices of all goods and services that were legally produced during one year.

GDP problems remind me of Winston Churchill (perhaps) saying that, “…democracy is the worst form of government except all the others that have been tried.”

Why Greece Would Have a Tough Time With a New Currency