The Cost of Curing Different Diseases

In what if? Randall Munroe wonderfully suggests how to eliminate the common cold.

A detour for a moment…Randall Munroe, was a NASA roboticist until, at age 22, he started xkcd. A combination of “romance, math, sarcasm and language,” xkcd is a webcomic that became the springboard for what if?

Really about tradeoffs, Munroe’s common cold reasoning takes us to the healthcare debate that we will soon consider.

The Cost of Eliminating the Common Cold

When you have a cold, rhinoviruses invade and, after a week or two, you win the war by killing all of the viruses. With everyone’s viruses dead, there would be no more colds.

How to let everyone’s virus die before someone else is infected? A quarantine.

Isolated, each person would just wait until his or her cold ended. Alone, that person would not have infected anyone else. And, at the end of that cold, that strain of rhinovirus would have been forever obliterated. In real life, the theory has worked. Small island populations have conquered some strains of the common cold until a ship arrives with a new one.

1. A global quarantine would temporarily halt all economic activity. If we assume that the world’s GDP is close to $80 trillion, then a “pause” for several weeks, could precipitate an economic collapse.

2. Location and food are problems. A quarantine means each of us has to be alone. Munroe calculates that there is enough room on the earth if each person is 77 meters from the next individual. But, being evenly dispersed around the globe means some people are at the North Pole, others are at the equator and a lucky group gets placed in some temperate zone where it is 70 degrees and sunny every day. With people spread out like that, it would be tough to allocate food.

Without even returning to the tradeoffs, he points out that the quarantine won’t work because people with impaired immune systems will leave the quarantine with live viruses and infect everyone all over again.

Okay, so quarantining the world is unlikely. But, whether looking at a quarantine or a pill, always healthcare treatment decisions requires tradeoffs.

The Cost of Treating Hepatitis C

Harvoni is a new Hepatitis C cure that costs $94,500 per patient. Three months of pills and the devastating disease is gone. Multiply $94,500 by the 3.2 million who need treatment and you get an astronomical number. Thinking economically, we know the opportunity cost of spending on one disease is using the money elsewhere.

Some say the solution is to lower the price.  But, according to a Tufts study, it costs $2.5 billion to develop a drug. Would firms do less research if they can’t cover their costs?

Another answer is to wait until the liver is impaired or the person is very ill before resorting to an expensive cure. To that we can reply that the tradeoff is years of treatment that could exceed the $94,500.

Looking at the price of new drugs during October 2014, you can see where our national debate on healthcare spending will go: 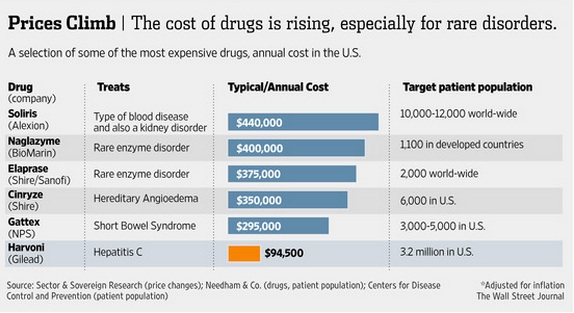 How much our country does to keep people healthy depends on the tradeoffs we are willing to make.

Why the Metric Switch is so Tough

One Song, Two Graphs and the Fed's Dual Mandate