Surely with a smile, Ben Franklin explained in a 1784 letter to the Journal of Paris a new discovery that would have great utility. First expressing the previous night’s dinner conversation about the excessive expense of the oil used for lighting, he then says he went home…

“…and to bed, three or four hours after midnight, with my head full of the subject. An accidental sudden noise waked me…when I was surprised to find my room filled with light; …rubbing my eyes, I perceived the light came in at the windows. I got up and looked out to see what might be the occasion of it, when I saw the sun just rising above the horizon, from whence he poured his rays plentifully into my chamber…

“I looked at my watch which goes very well, and found that it was but six o’clock; and still thinking it something extraordinary that the sun should rise so early,.. Your readers, who with me have never seen any signs of sunshine before noon…will be as much astonished as I was, when they hear of his rising so early, and especially when I assure them that he gives light as soon as he arises…One cannot be more certain of any fact. I saw it with my own eyes. And, having repeated this observation the three following mornings, I found always precisely the same result.”

A bit later in his letter, Franklin gets to the opportunity cost of sleeping until noon:

“…I considered that, if I had not been awakened so early in the morning, I should have slept six hours longer by the light of the sun, and, in exchange have lived six hours the following night by candle-light; and, the latter being a much more expensive light than the former, my love of economy induced me to muster up what little arithmetic I was master of, and make some calculations…”

His calculations took him to the immense savings created by early risers. In just 183 nights, Parisians would demand 64,050,000 less pounds of wax. All someone needed was a tax on shutters or a cannon that fired at sunrise, and then, having awakened earlier, “… it is more than probable he will go willingly to bed at eight in the evening; and, having had eight hours sleep, he will rise more willingly at four in the morning following.”

The Unintended Consequences of DST

In Australia, we accidentally wound up with the perfect experiment. Because of the 2000 summer Olympic Games, for one year, two states implemented DST two months sooner and thereby provided researchers with the opportunity to “isolate the effect of daylight-saving time from any other legislation that changes potential electrical demand…”

You can see below that DST had little if any impact. Offsetting any saving for less evening demand, energy use increased during the morning: 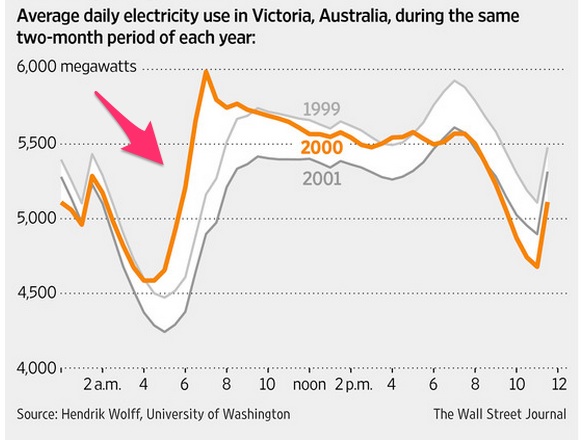 Then, further challenging the validity of DST, in a 2008 Indiana study based on 7 million “observations,” researchers concluded that DST actually increases individual residential electricity use as well as the social cost of pollution.

If indeed, the opportunity cost of Daylight Saving Time is greater than we realize, perhaps, like Arizona and Hawaii, we should remain with Standard Time next March when we are supposed to “spring forward.”

What It Means to be Cool

The Benefits of Perpetual Federal Debt