Why Do Young Adults Live With Their Parents?

In Slovakia, Bulgaria, Greece, Malta and Italy, young people, age 25-34, live with their parents. But not in Denmark, Finland Sweden, and Norway.

Below you can see the country stats: 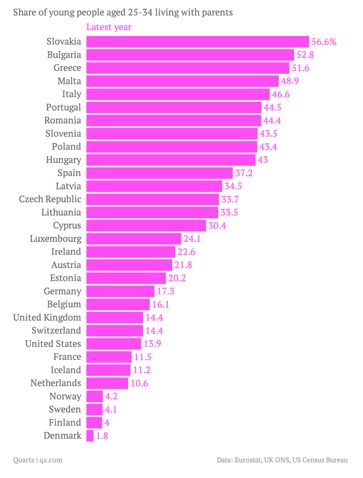 Pew Research provided some insight about multigenerational U.S. households. In 2012, returning home to live with parents was so widespread a phenomenon that the kids felt okay about moving back. When we combine a tough job market, descending marriage rates, and increasing college enrollment, we get what Pew calls a boomerang generation.

Interestingly, at 36%, the Pew numbers far exceeded the 13.9% in the Quartz chart. The most likely reason is that the Quartz data was for older Millennials living at their parents’ home while Pew started at age 18. When Pew divided their U.S. results for 18 to 24 year olds and 25 to 31, the “boomerang” rate was 56% for the younger cohort versus 16% for those who were older.

Looking at the data for the US and beyond, it is very easy to conclude that the recent recession created the incentive for young adults to live with their parents. I found though in the academic literature that much more lies beneath the surface. In some countries like the UK and Spain, the housing market has affected the numbers of Millennials who live with their parents while elsewhere it was unemployment. Also though, tradition related. Certain countries, especially Portugal, Ireland, Italy, Spain and Poland have always had a higher proportion of “composite households.” By contrast, the UK, Denmark and the Netherlands have had the lowest rates of children remaining at their parents’ home.

As economists, it is pretty important to know who lives together because of the dual economic role played by households. As the source of land, labor and capital, households provide businesses with the 3 basic factor resources. Meanwhile, on the other end in product markets, household spending typically fuels the GDP. When adult children and parents form “composite households,” their behavior changes in factor and product markets.

Sources and Resources: For the statistical overview, Quartz provided the international overview while Pew had the US focus on Millennials returning home. Taking the next step toward some insight, though, I found this and this academic paper were ideal.

Have We Halved the Deficit?

Is the Super Bowl "Cheap" This Year?