How Bruce Springsteen Should Price His Platinum Tickets

You could pay $4,000 or $5,000 for a Bruce Springsteen platinum ticket. While fans have criticized the high price, an economist might not.

For the 2023 Bruce Springsteen concert tour, tickets come in several batches. It appears that for approximately 88 percent of the tickets that were sold so far, there is a range of fixed prices. In that $60-$400 group, the average price was $262. Then though, a second batch is dynamically priced. Rather like Uber’s surge pricing, the second group’s prices depend on supply and demand. Called Platinum, those tickets seem to be more available.

During 2018, Taylor Swift had a similar approach. At $50-$450, some tickets remained low. Meanwhile others could go from $500 to $1500 and beyond. Rather like the airlines, certain seats would be offered initially for high prices but later for less if they did not sell. They also reduced the proportion of tickets StubHub and other resellers would have gotten for the tour from 30 percent to just 3 percent.

As economists, we can say that Springsteen ticket prices are really about rationing.  Defined as how we allocate a limited quantity of goods or services, we always ration. Sometimes money is the rationing mechanism. Other times it could be time or even age.

Now, with Springsteen changing his rationing approach, he is recognizing monopoly pricing, dynamic pricing, and elasticity.

Monopolists see the market through a lens that divides buyers according to what they can spend. So a student might get a low price while the more affluent individual selects the Platinum option. By charging different groups difference amounts, monopolies engage in price discrimination.

The airlines and Uber most typically employ dynamic pricing. The basic idea is to raise the price when people are willing to pay more. Airlines can boost the fare closer to the departure day. With Uber, the surge comes during bad weather and catastrophic events. Similarly, the Springsteen ticket sellers can use a dynamic pricing model for a select group of their fans.

We could say that dynamic pricing works because of demand elasticity. Elasticity is the concept that recognizes how each of us responds to a change in price. If that response is minimal, then our price elasticity of demand is inelastic. We want that ticket, no matter how much we have to spend. Other fans though are price sensitive. More elastic, their willingness and ability to buy a pricier ticket plunges when cost is up. Because Bruce Springsteen’s advisors decided he had fans with inelastic demand, he could charge sky high Platinum prices.

Indeed, by being more aware of his rationing options, Mr. Springsteen can fairly optimize his revenue.

My sources and more: Thanks to Marketplace Tech for alerting me to the price of Springsteen tickets. From there, Variety and the NY Times had more details.

Our featured image is from WSJ PHOTO: MANU FERNANDEZ/ASSOCIATED PRESS.

Finally, I wanted to share this graphic once again: 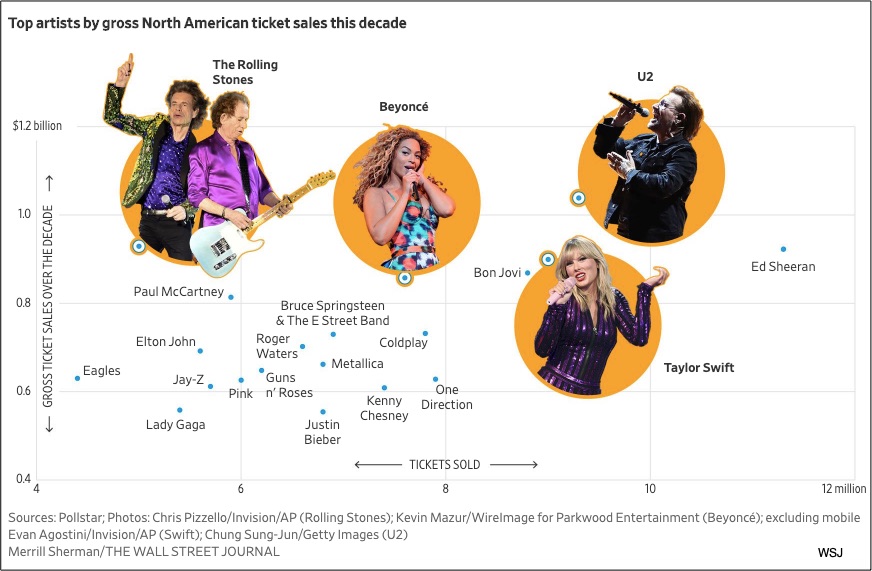 Our Weekly Economic News Roundup: From iPhones to Cheerios

Are We Near Peak Population?