Are We Near Peak Population?

On November 15 (or so) the world’s population will pass eight billion.

So, nine and ten billion should be just around the corner?

Basing its projection on historic patterns, the U.N. tells us that world population will have surpassed 10 billion during the 2050s. The big question though is how much their computer models should also recognize recent anomalies. Birth rates have been falling. Families are smaller. Education is on the rise. Using past trends, the U.N.says they recognize all of these changes. However, demographers suggest their models insufficiently see where the world is heading.

At the Wittgenstein Centre for Demography and Global Human Capital at the University of Vienna, demographers believe that peak population will be much sooner and not nearly as high. In fact, they tell us that while eight billion is almost here, we will see a 9.67 peak in 2070. In a second scenario, they say it is even possible to touch peak at 8.7 billion in 2050. Then, from there, it is all down hill.

You can see the Wittgenstein Centre’s curve is far different from the U.N.’s projections:

One big “if” is how quickly Africa’s fertility rate will decline. Because the U.N. expects a slower drop than Wittgenstein, the two groups have vastly different population projections. The U.N. says Africa’s population will ascend from 1.3 billion now, to 3.9 billion by 2100. By contrast, Wittgenstein says 2.9 billion is likely but a “rapid development” scenario would bring the number down to 1.7 billion. 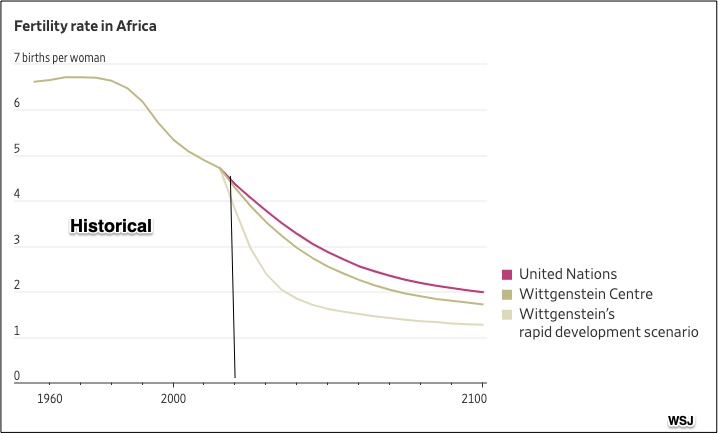 In addition, demographers are debating if and when China’s low fertility rate will go up:

What we do know is that populations are aging and birth rates are down.

Our population statistics reminded me of Hans Rosling’s (1948-2017) legacy. He knew how to make statistics memorable by making them interesting.

In 2010, Dr. Rosling told the Economist magazine that, “We can stop population growth, we can eradicate poverty, we can solve the energy and the climate issues but we have to make the right investments. I know a good world is possible if we leave emotion aside and just work analytically.” From there, he was able to summarize the analysis through statistics.

His message? Only with accurate facts can we help people live healthier and wealthier lives.

Here is my favorite from Dr. Rosling:

My sources and more: Thanks to WSJ for letting me know we were at the eight million mark. The ideal complement, Gapminder has it all if you just want to see Dr. Rosling’s work. One warning. Once you start, it’s tough to stop. I do also recommend taking a look at this NY Times obituary and listening to this podcast if you have less time. Best of all though are his TED talks. (Please note that several of today’s sentences on Hans Rosling were in a previous econlife post.)

How Bruce Springsteen Should Price His Platinum Tickets

What the OX Adds to Rwanda's Cold Chain