During 2015, Google decided it needed a new name. The reason could have been their self-driving car. After all, when we think of Google, search and information come to mind. The car did not quite fit.

So, they did some rebranding, created a new holding company, and gave Google a slew of  siblings. Its sisters included a subsidiary that was researching human longevity (Calico), one focusing on high speed internet connections (Fiber), and a venture capital group (Google Ventures).

This was the structure of the first Alphabet: 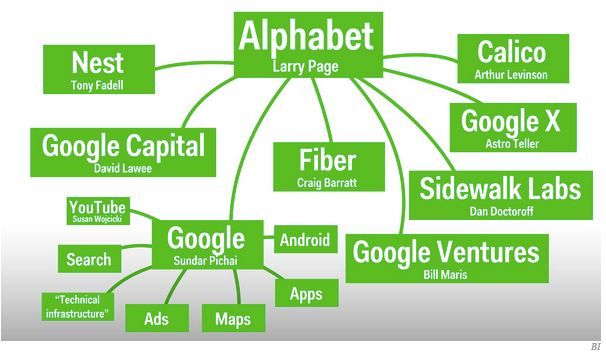 Now, as Meta, Facebook will also rebrand and restructure.

As the new name for the whole company, Meta represents rebranding. We could think of a firm’s brand as its bank account. Sort of like deposits, new products can make that brand more valuable. Think Apple and the iPhone. A perfect match, the iPhone and the Apple brand created a synergy. Together they helped to make the Apple brand worth $612 billion.

Similarly, through a new name for its parent company, Facebook surely hopes to boost the value of its brand (now close to $227 billion). Referring to “beyond” or “above,” the meaning of Meta is in positive territory. Also, worldwide, its pronunciation is pretty much the same. Furthermore, planning ahead Facebook (secretly) owned the trademark. And, as we know, the company hopes to divert us from Facebook’s negative publicity.

Below, you can see Mark Zuckerberg and the Meta logo that will include Facebook, Instagram, Oculus (to be renamed Meta Quest), and WhatsApp: 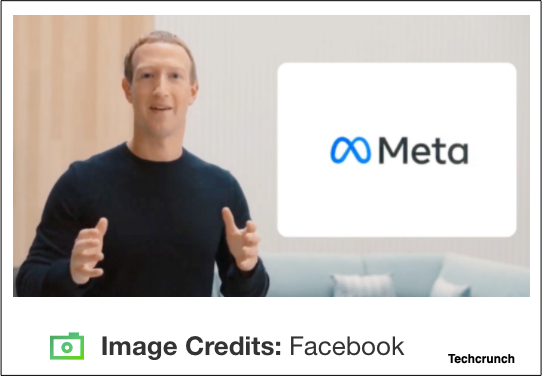 Our Bottom Line: Strategy and Structure

As Meta, Facebook will divide its corporate structure between two entities. Called “Family of Apps,” and “Reality Labs,” the two groups compose what is supposed to become a “metaverse” company. Replacing FB, its new ticker symbol is MVRS.

More than 50 years ago in Strategy and Structure: Chapters in the History of American Industrial Enterprise, Alfred Chandler told us that corporate strategy and structural change evolve together. For Chandler, the focus was the corporate decentralization that early 20th century giant enterprise required. He saw, for example, why a newly created hierarchy with dispersed responsibilities at General Motors drove the firm’s growth. With Google, it was a clearly defined parent that eliminated brand confusion.

For Facebook, we will see where the rebranding takes them.

My sources and more: BusinssInsider had the Alphabet story and VisualCapitalist summarized the value of leading brands. Then, for the up-to-date connection, this Marketplace report, TechCrunch, The Verge, and FT had the new Facebook facts. Please note that our featured image is from Vjeran Pavic/The Verge and several of today’s sentences were in a previous econlife post on branding.

A Land and Lobster War

A New Kind of Grape Picker