The World Economic Forum recently published its annual Global Gender Gap Report. In a 407 page study, they move from four general categories to a list of specific subindexes. They look at the world, at regions, and at individual countries.

As we consider their data, please think about the gargantuan amount of land, labor, and capital that the gender gap wastes.

Through its four categories of indicators, the Report compares men and women. A score displays the extent to which the gender gap has been closed. As a result, a country’s number reflects the distance to parity that it has achieved. Assume for example that college enrollment is 100 percent for men and for women in Country A and 60 percent for both in Country B. Though the numbers are very different, the 100 and 60 each show men and women at the same level. Consequently, Countries A and B would have a similar rank. They both display parity.

These are the four categories:

Among the 10 countries with the smallest gender gap, Iceland has topped the list for 12 years: 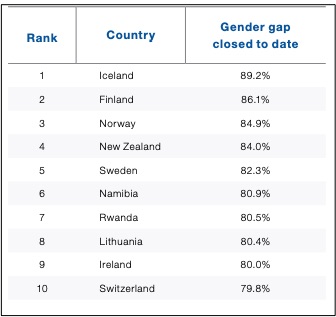 You can see below that politics and economics had the largest disparity. With a 68 percent global average, we can say a 32 percent gap remains to be closed:

In the 156 countries covered by the Report, women are vastly underrepresented as members of parliament, as ministers, and as heads of state. For the economic gap, they do point out that more women occupy skilled professions. However, looking at leadership positions and the pay gap, we see little progress. The good news is on the education and health fronts where there is almost no gap.

When we look more closely, the scores vary considerably. For political empowerment, the spread ranges from 0% to 76%. Similarly, for economic empowerment, the low end was 18% of parity while the high was 92%. Below you can see that gender equity for health is high in Peru. For politics, Iceland has much more equality: 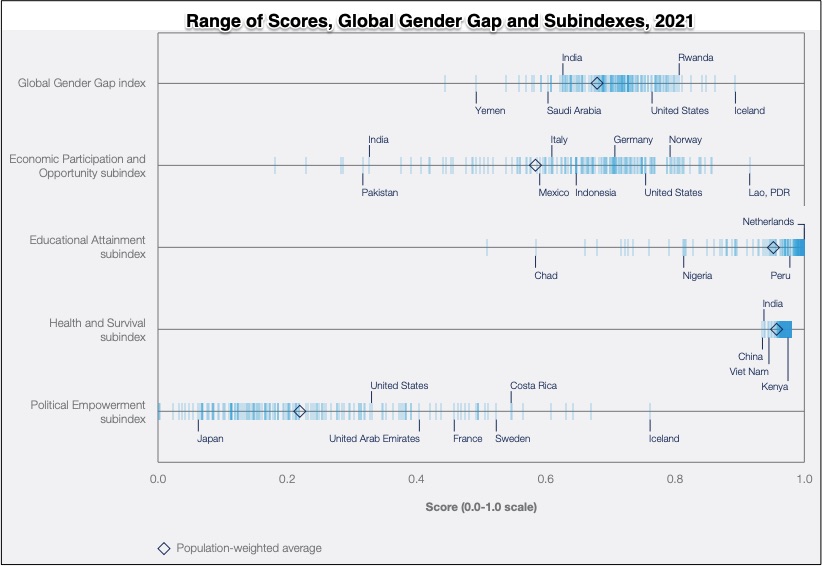 The curve displays the maximum potential of an economy. The dot shows us the underutilization that is created when a country fails to optimize female time and talent:

My sources and more: For a bonanza of gender equity data on 156 countries, do spend some time with the WEF report. Then, for more on past reports, econlife had a summary and also some skepticism about ranking. Please note that all charts and graphs (except for what I drew for production possibilities) are from the Global Gender Gap Report 2021.

What We Don't See in a Movie Theater