Questions About the Global Gender Gap

The World Economic Forum (WEF) tells us that Iceland leads the world in gender equality while the women in the Philippines are #7. 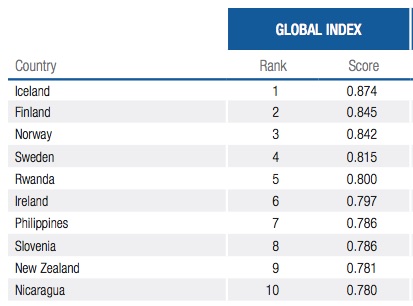 To rank gender equity, the WEF uses 14 indicators. When they measure economic participation and opportunity, wage equality for similar work is one variable. Their score for education is partially based on primary and secondary enrollment. In the health component, life expectancy counts. And with political empowerment, one area is women in government.

You can see that the metrics are pretty standard and predictable.

But some of the scores appeared surprising. Do note that Iceland’s health and survival rank is 104 out of 144 countries:

Meanwhile, the Philippines were #1…the best possible:

Why then is Iceland ranked so far below the Philippines?

The answer is the WEF methodology. Because the scores are based on a male female comparison within each country, a Filipino woman fares beautifully in terms of her male counterpart.

Similarly with education, a country like Iceland has close to 100% secondary education enrollment for males and females. In the Philippines, the numbers are closer to 60%. And yet both have the same score because we are recording a male female ratio.

Ranking scores can be misleading. We could be expecting an absolute order from best to worst when the sequence actually represents something quite different. We also could assume that everyone defines terms like income in the same way although there are multiple possibilities. And beyond that, Malcolm Gladwell warns us that some attributes are not quantifiable … even if a number suggests they are.

So whether looking at colleges or income or the global gender gap, we can consider a rank with some skepticism.

My sources and more: If you read just one article, this Malcolm Gladwell discussion of ranking should be the one. However, I do recommend continuing onward to the World Economic Forum’s Global Gender Gap Report and comparing it to the UN Gender Inequity Index. After that, this analysis of the Philippines’ rank could provide more insight as will this NY Times column.

A Different Kind of Apple Patent