We’ve just begun Fat Bear Week. Between September 30 and October 6, each of us can vote for the chubbiest brown bear in Alaska’s Katmai National Park.

These are the brackets: 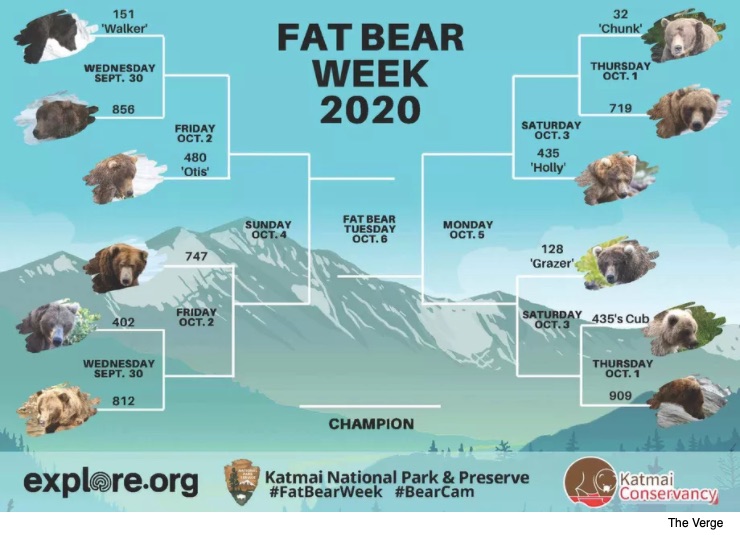 A fun competition, the contest is also about some weighty issues.

The contest began in 2014 to teach us a bit about ursine health. Just before temperatures drop below freezing and a 6-month hibernation is imminent, brown bears eat as much as 120 pounds of salmon a day. Scientists are curious about why brown bears fare so well after such a long snooze. Their research relates to our cardiovascular health, obesity, space medicine, and bed-ridden patients.

In my favorite video, (the legendary) Otis very carefully eats one fish:

And below, you can see Holly before and after bulking up:

President Trump’s officials just reversed an Obama Administration decision. They gave the go-ahead to a mining proposal from a group called Pebble Hill. While the mine’s gold and copper could generate jobs and $500 billion, the sockeye salmon habitat where the brown bears feast would be devastated.

An economist would say that because of scarcity, we have to make tradeoffs. Since there is a limited quantity of most goods and services, “choosing is refusing.” Shown on a production possibilities graph, more of one item means less of another one. Below you can see that as you move along the curve, more minerals mean less wilderness: 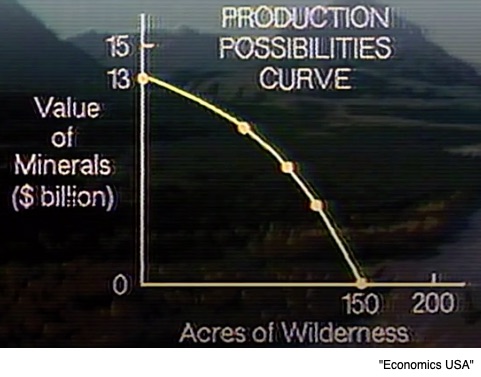 And, it also means less food for Otis, Holly, and their brown bear friends.

My sources and more: I just learned about Fat Bear Week and have been riveted. The Verge told the story, SBNation had even more, and explore introduced each bear. Then Vox focused mostly on Holly while here, I learned more than I could imagine about hibernation. And finally, the environmental threat was described by The Washington Post. I recommend all.